BY Heather Hughes on August 14, 2019 | Comments: one comment
Related : Soap Opera, Spoiler, Television, The Young and the Restless 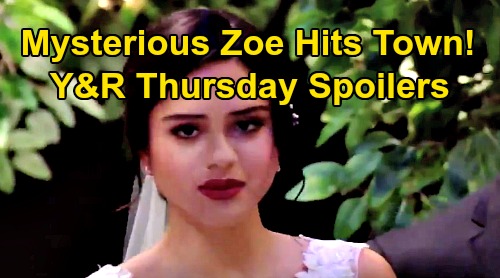 The Young and the Restless (Y&R) spoilers for Thursday, August 15, tease that Summer Newman (Hunter King) will grow curious about Kyle Abbott’s (Michael Mealor) massive mistake. There’s something in Kyle’s past that he doesn’t want getting out. Theo Vanderway (Tyler Johnson) is the only one in town who knows the truth so far, but that’s about to change.

This might have something to do with Zoe Hardisty’s (Anna Grace Barlow) arrival. The Young and the Restless spoilers say Zoe will hit Genoa City on Thursday, so Summer may wonder what the deal is. Theo will likely summon Zoe to cause drama – or at least make Kyle sweat a bit before he ties the knot.

Theo obviously enjoys pushing his former friend’s buttons, but Summer will likely fret about what’s in store. Despite her lingering feelings for Kyle, Summer knows he’s in love with Lola Rosales (Sasha Calle). Part of Summer won’t want to see Kyle’s happiness destroyed, even if it could give her a shot with him.

Y&R spoilers say Summer will grill Theo in Thursday’s episode. She’ll want to know what kind of ammo he’s packing so she can be prepared. It may take some convincing, but Theo will ultimately reveal Kyle’s New York secret.

Of course, The Young and the Restless fans were already given a couple clues. We know this has something to do with a 17-year-old girl who nearly died. We also know Kyle paid off her father to make sure this problem went away.

Since Kyle has frequently mentioned all the partying he did, perhaps they had drugs at a bash where underage girls were invited. Zoe might’ve almost died from an overdose. Then again, it could’ve been some immature stunt that Zoe was peer pressured into. She might’ve been severely injured in a fall or something along those lines.

Whatever the case, it doesn’t seem like Kyle was directly responsible for this. He may have been in charge of the party, but there were clearly others involved – including Theo. The secret itself probably isn’t that big of a deal; it’s Kyle’s lie that’s the real issue. He’s bending over backwards to make sure Lola doesn’t find out and that’s bound to bite him later.

For now, Summer will discover this shocker and choose to sit on it. She won’t want to come between Kyle and Lola, so she’ll keep her mouth shut and possibly encourage Theo to do the same. Over with Lola, she’ll have a bad feeling about the looming nuptials. She’ll freak during a chat with Mariah Copeland (Camryn Grimes) and Tessa Porter (Cait Fairbanks), who will offer reassurance.

Lola may feel like Zoe showing up is an omen. She won’t know the full story, but Zoe could ruffle a few feathers anyway. Then again, Lola’s mind may drift back to her father’s letter. She’ll just have his doom and gloom mentality, but Mariah and Tessa will give her a pep talk. They’ll have high hopes for successful “Kola” nuptials.

Finally, Sharon Newman (Sharon Case) and Rey Rosales (Jordi Vilasuso) will patch things up. Does that mean they’ll reunite romantically? It sounds like it, but that may not be the right call with Adam Newman (Mark Grossman) lurking in town. As long as Adam’s in GC, he’s going to be a threat to Sharon and Rey’s relationship. Sharon can claim whatever she wants, but the “Shadam” pull is magnetic.