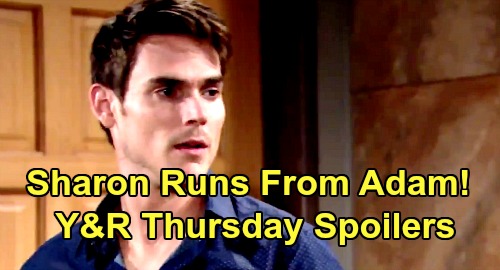 The Young and the Restless (Y&R) spoilers for Thursday, August 22, tease that Adam Newman (Mark Grossman) will face Sharon Newman’s (Sharon Case) rejection. He should’ve expected this since Sharon wanted nothing to do with him a few days ago. However, Adam seems to view Sharon as the one person he can consistently manipulate. He’s used to getting his way when it comes to Sharon, but that won’t be the case on Thursday.

Y&R fans can expect Sharon to turn down Adam’s proposal, which is an appropriate response. Who agrees to marry someone when you aren’t even dating? Sharon views their hookup as a mistake and knows this marriage would be a mistake, too. That’s not to say Adam and Sharon won’t get married down the road! It could certainly happen, but now just isn’t the time for “Shadam” to tie the knot.

Unfortunately, Adam won’t take the rejection well. It looks like Sharon will make a comment that sets Adam off, so a fierce outburst is brewing. The Young and the Restless spoilers say Adam’s anger will erupt, which should leave Sharon upset. She knows Adam is a complex guy with a plenty of troubles in his past, so she tends to have sympathy for him.

At the same time, Sharon can’t condone much of Adam’s horrible behavior. To be fair, Adam isn’t the only Newman acting out. Nick Newman (Joshua Morrow) is really no better than his brother, and the same goes for Victoria Newman (Amelia Heinle). We’ve also got Victor Newman (Eric Braeden), who tried to use Christian Newman (Alex Wilson) to spark Adam’s interest in staying in GC only to file a restraining order later.

Nevertheless, Adam’s the big bad wolf as far as Genoa City is concerned! He’ll feel like even more of an outcast after Sharon insists this marriage isn’t going to happen. As for Sharon, she’ll end up seeking comfort from Nick. Adam’s meltdown will rattle Sharon and could make her more convinced than ever that Adam is dangerous. She wants to see the good in him, but the bad may win out for a while.

Over with Chelsea Newman (Melissa Claire Egan), she’ll meet up with Phyllis Summers (Michelle Stafford) to talk business. Phyllis wants to make a deal since Chelsea recently acquired a fortune. She’ll try to sell Chelsea on the idea of teaming up, which would secure the hotel stake Phyllis so desperately wants.

Chelsea will fight Phyllis on this, but a deal will be cut later. That doesn’t necessarily mean it’ll be with Phyllis – at least at first. Abby Newman (Melissa Ordway) could swoop in and make things difficult thanks to Victor’s warning.

The Young and the Restless spoilers say Chelsea will stab Phyllis in the back at some point. That’ll prompt Phyllis’ retaliation, but these two will definitely become business partners. It’s just a matter of when everything will come together.

Finally, Kyle Abbott (Michael Mealor) and Lola Abbott (Sasha Calle) will focus on the future. They’ll put the issues of the past to rest and make new plans for their life together. Sadly, there’s one piece of Kyle’s history that’ll come back to haunt him. Lola doesn’t know the Zoe Hardisty (Anna Grace Barlow) story, but she will sooner or later.

This supposedly huge secret isn’t all that bad, so Kyle’s deception will likely be the real problem. Of course, that’s a bombshell for another day! For now, The Young and the Restless spoilers say Kyle and Lola will remain in newlywed paradise.

It sounds like another great episode’s coming up. We’ll give you updates as other Y&R news emerges. Stick with the CBS soap and don’t forget to check CDL often for the latest Young and the Restless spoilers, updates and news.