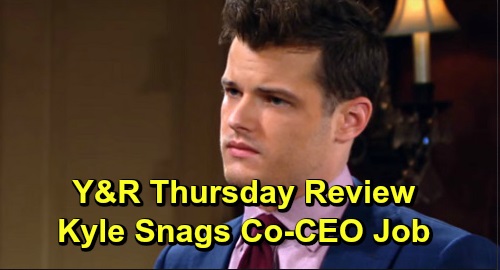 The Young and the Restless spoilers review for Thursday, December 12, tease that Summer Newman (Hunter King) will spot Theo Vanderway (Tyler Johnson) rummaging through some papers on Jack Abbott’s (Peter Bergman) desk at Jabot. Summer will question what he’s doing, and he’ll note that he’s just looking for some notes that Jack left him, but Summer will remain skeptical.

Meanwhile, Kyle Abbott (Michael Mealor) will have dinner with Jack at Society, and Jack will quickly surmise that Kyle has something to ask him. Kyle will then ask Jack to reinstate him as CEO of Jabot, which will shock him. Jack will balk, and Kyle will say that if Jack doesn’t promote him, then it might be time for him to move on somewhere else. Jack won’t need time to think about it; he’ll agree to give being co-CEOs a trial run.

Across the room, Mariah Copeland (Camryn Grimes) will run into Lola Abbott (Sasha Calle) and tell her that Theo and Summer broke up, and that Lola should be careful of Summer because Kyle’s naive when it comes to her. Kyle will then wave Lola over and she’ll learn that Kyle is now co-CEO. They’ll be celebrating and congratulating Kyle when Theo comes in and unsuccessfully tries to join the party.

Kyle will head back to Jabot, where Summer will have champagne waiting. He’ll balk a little at the champagne but will eventually join in. They’ll have a good time celebrating together, and Summer will end up warning Kyle about Theo and his snooping around the office earlier. They’ll toast to moving up and moving on.

Arriving at home, Kyle will find Lola in a robe, and she’ll have champagne to celebrate as well, but he’ll want to skip that since he already had some at the office…with Summer. Lola won’t exactly like that, but she’ll get over it quickly and Kyle will note that it was a really good day as they start to make out.

Meanwhile, on the new episode of Y&R on Thursday, December 12, Devon Hamilton (Bryton James) will inform Mariah that Elena Dawson (Brytni Sarpy) has made peace with Amanda Sinclair (Mishael Morgan). Mariah will be shocked, and Devon will say that Nate Hastings (Sean Dominic) was behind it. Devon will clearly be in a bad place over the Amanda situation, and Mariah will warn him to be careful.

Later, Nate will come to see Devon, and Devon will be testy with him from the get-go. Nate will express his concern for Devon and that Elena knows that he’s feeling pain over losing Hilary Hamilton (Mishael Morgan), which has been triggered by Amanda. It will take some doing, but ultimately Devon will admit that he’s struggling and that he flashes to being at Hilary’s side at the hospital when he looks in Amanda’s eyes. Devon will vow to stay away from Amanda.

But soon, Victor Newman (Eric Braeden) will show up at Devon’s with information about Amanda. He’ll tell Devon that he encountered Amanda when she was defending Nate and that he was impressed by her, but that he had her investigated and that there’s a reason why Devon couldn’t find out anything about her online – she hired a company that specializes in erasing online history right about the same time Colin Atkinson (Tristan Rogers) started his scheme.

Devon will suddenly feel vindicated and will say that he just knew that Amanda was involved with the scam, despite everyone telling him that she was innocent. Victor will then hand over the dossier on Amanda, and he will promise that they’ll get Colin and his accomplice, if it’s Amanda. Devon will then look more determined than ever to go after Amanda.

One wonders whether Elena and Devon’s relationship is going to be able to survive Devon’s attitude and obsession over bringing Amanda down. He’s probably going to be even more obsessed now that he’s got his hands on the dossier that Victor provided – and he might just have enough information to put Amanda in grave danger. It is looking more and more like Amanda may have a stalker and/or abusive ex after her, and Devon’s investigation could ultimately smoke her out for the person she’s running from.