BY Heather Hughes on January 23, 2019 | Comments: one comment
Related : Soap Opera, Spoiler, Television, The Young and the Restless 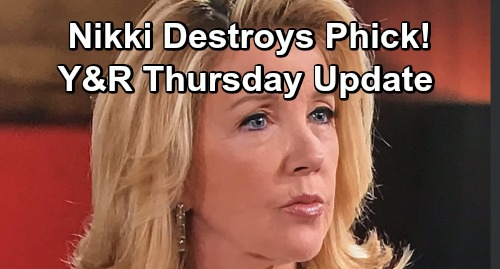 The Young and the Restless (Y&R) spoilers for Thursday, January 24, tease that Devon Hamilton (Bryton James) will be baffled by Ana Hamilton’s (Loren Lott) secrecy. He’ll note that she’s a great songwriter, so he won’t see why she would keep that under wraps. Ana will discuss how she was duped in the past. Although she trusts Devon, Ana just didn’t want to go down that road again.

When Ana reiterates that she wants to work anonymously, Devon will grant the request. A little later, Ana will sing at the piano and bring Devon to tears. Her song about memories will undoubtedly remind him of Hilary Hamilton (Mishael Morgan).

At Jabot, Phyllis Summers (Gina Tognoni) will continue her argument with Nikki Newman (Melody Thomas Scott). She’ll argue that she had to keep the fireplace poker to avoid being thrown under the bus. Phyllis will rant about protecting herself along with Sharon Newman (Sharon Case) from Nikki and Victoria Newman (Amelia Heinle).

Nikki will blame Phyllis for framing Victor Newman (Eric Braeden), but Phyllis will deny it. She’ll claim the fireplace poker was at a storage facility and argue that someone tracked her there. Nikki will insist that Phyllis is a liar and can’t be trusted. She’ll refuse to listen to Phyllis’ explanation, so this alliance will remain torn apart.

At Victoria’s place, Sharon will stop by and admit Phyllis wanted to form a secret partnership. Victoria won’t be surprised since Phyllis has already been causing destruction. That’ll lead to a conversation about Billy Abbott (Jason Thompson) and the possibility that Victoria is a rebound. Sharon won’t think so. She’ll feel like Phyllis is the real troublemaker here.

Talk will turn to Victoria’s kisses with Cane Ashby (Daniel Goddard). She’ll confirm that they made out and got caught by Billy. Victoria will point out that her feelings for Billy are strong, but she has to shut this down. She won’t think it’s a good idea to start their relationship back up with all this J.T. Hellstrom (Thad Luckinbill) drama hanging over them.

Sharon will encourage Victoria to go after what she wants. She’ll give Victoria a hug, so at least a couple of cover-up crew members are getting along! Afterward, Nikki will stomp in raging over Phyllis’ behavior. She’ll learn about the secret partnership plans from Victoria and reveal that Phyllis kept the fireplace poker. Nikki will complain that Phyllis is setting Victor up and something must be done.

Victoria will contend that step one is blabbing to Nick Newman (Joshua Morrow). The Young and the Restless spoilers say Nikki will take the advice and make a phone call. She’ll tell Nick that she has info that could change both his investigation and his relationship.

Over with Abby Newman (Melissa Ordway), she’ll reluctantly attend the vow renewal with Arturo Rosales (Jason Canela). Abby won’t want to be around Mia Rosales (Noemi Gonzalez), but she’ll agree to go since Arturo’s the best man. He’ll be pleased since this is going to be an unforgettable night.

After Mia and Rey Rosales’ (Jordi Vilasuso) ceremony wraps up, Arturo will drop to one knee and propose to Abby. She’ll definitely be taken aback by this Y&R engagement bombshell. Back at Jabot, Billy will make a confession to Phyllis. He’ll admit he saw Victoria kissing Cane, so he squealed on them to Lily Ashby (Christel Khalil).

When Phyllis hears that Lily was calm about it, she won’t think it was a good sign. Billy will have a hard time understanding Victoria’s actions, but Phyllis will hint that her wounds run deep. She’ll think Billy just has to decide if he’s willing to work through Victoria’s issues with her.

The Young and the Restless spoilers say Billy will indeed reach out to Victoria on next week’s new Y&R episodes, January 28 – Febraury 1. Does “Villy” stand a chance after all? We’ll give you updates as other Y&R news comes in. Stay tuned to the CBS soap and don’t forget to check CDL often for the latest Young and the Restless spoilers, updates and news.