BY Heather Hughes on July 10, 2019 | Comments: one comment
Related : Soap Opera, Spoiler, Television, The Young and the Restless 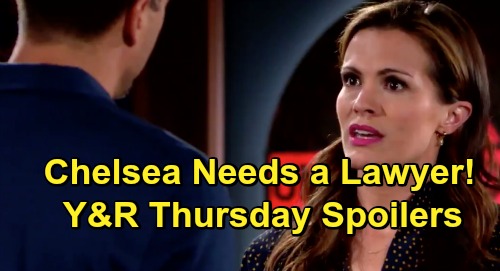 The Young and the Restless (Y&R) spoilers for Thursday, July 11, tease that Rey Rosales (Jordi Vilasuso) will get back in the action. Nick Newman (Joshua Morrow) thought Rey would have better luck with Riza Thompson (Tina Casciani) in person, so he urged Rey to make a return trip to Vegas. Sharon Newman (Sharon Case) decided to tag along, but they can’t run from their problems.

Adam Newman (Mark Grossman) will be right there waiting in Genoa City, so expect another round of Y&R drama. Sharon and Rey will face intense Adam-related conflict on Thursday. Despite Sharon’s insistence that Rey’s the man she wants, her lingering connection to Adam will prove concerning.

Jealousy is undoubtedly a factor for Rey, but there’s more to the story. Rey doesn’t trust Adam and doesn’t want Sharon to become his prey. He knows how trusting Sharon can be, so he doesn’t want Adam taking advantage of her good nature. Of course, Sharon will likely get fed up with this same old conversation. She may feel like Rey should trust her and stop treating her like some fragile flower.

However, Rey may have a point here. Sharon can be a fierce force to be reckoned with at times, but Adam almost seems like her Kryptonite. She can’t help but feel sorry for him when he’s in pain. Adam can be reckless and dangerous, but Phyllis Summers (Michelle Stafford) suggested that makes Sharon feel alive – perhaps far more than her Dudley Do-Right former detective boyfriend.

The Young and the Restless spoilers say Rey and Sharon’s tension will erupt. A big blowup’s brewing, so that could send Sharon running in Adam’s direction. Since he’s dealing with a broken heart over Chelsea Newman’s (Melissa Claire Egan) rejection, perhaps Adam and Sharon will lean on each other soon.

Meanwhile, Nick Newman (Joshua Morrow) will reach out to a face from the past. He’ll count on an old friend to help him out, so this might be regarding Chelsea’s custody situation. If she’s going to keep Adam from Connor Newman (Gunner and Ryder Gadbois), Chelsea’s going to need a lawyer. Then again, Chelsea could need a hotshot attorney to beat a murder charge when Paul Williams (Doug Davidson) returns with accusations.

Could Nick contact Avery Bailey Clark (Jessica Collins), who’s been buzzed about as a likely return? Whatever the case, The Young and the Restless spoilers say Nick will continue to give Chelsea his full support.