The Young and the Restless Spoilers: Thursday, July 18 – Jack Plots With Ashley, Abby’s Love Move, and Traci Gets Cane To Open Up

BY Olivia Marie on July 17, 2019 | Comments: one comment
Related : Soap Opera, Spoiler, Television, The Young and the Restless 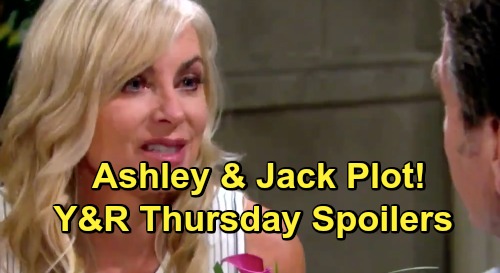 The Young and the Restless (Y&R) spoilers for Thursday, July 18 tease that Jack Abbott (Peter Bergman) will head to see his sister Ashley Abbott (Eileen Davidson) in Paris, France. He will tell her that he needs some family time as he’s been struggling to feel grounded.

While in Paris, Ashley offers to give Jack a tour of her new facility and lab. The Young and the Restless spoilers say that Jack is impressed by everything she has accomplished. After they are done with lunch and the tour, Ashley asks her brother what the real reason that he came to see her.

Jack will explain between Dina Mergeron’s (Marla Adams) health declining and Jabot almost going down after her exit from the company, he’s on edge and needs to find his footing again. Ashley will have solid advice for her brother, but will he listen?

Back in America, Cane Ashby (Daniel Goddard) and Traci Abbott (Beth Maitland) will chat about their future. Y&R spoilers say Cane will open up to her and he admits he is happier now than he has been for a long time.

Traci will be happy to hear that he’s in a better place and she hopes that her friendship helped him. Of course, Cane will say she’s been a great influence on him. They will vow to have fun in New York and make some lasting memories that they both will remember for years to come.

Meanwhile, in Genoa City, Abby Newman (Melissa Ordway) will make a power move. The Young and the Restless spoilers suggest this doesn’t have anything to do with business. Instead, it is related to her love life.

Over the past few weeks, Y&R has started to build a relationship between Abby and Nate Hastings (Sean Dominic). Abby seems to enjoy his company and he is smitten with her.

Y&R spoilers point out that Abby is nervous about falling in love as it has never worked out for her. Is it possible that Nate could be the love that she’s been searching for? We’ll have to wait and see to see how it plays out.

Don’t forget to come back for more The Young and the Restless (Y&R) spoilers, news, and casting updates!