The Young and the Restless Spoilers: Thursday, May 2 – Victor Takes Charge of Tricky Adam Situation – Kyle’s Risky Vow to Lola

BY Heather Hughes on May 1, 2019 | Comments: one comment
Related : Soap Opera, Spoiler, Television, The Young and the Restless 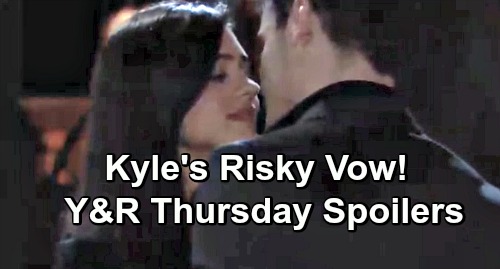 The Young and the Restless (Y&R) spoilers for Thursday, May 2, tease that Victor Newman (Eric Braeden) will fight for control. He’ll find himself in a tricky situation, so he’ll have to take charge of it right away. Victor doesn’t like to let anyone else run the show, which is why he’ll step up and make sure he’s got a firm grip on the drama.

There’s a good chance this has something to do with Victor’s big secret. He may sense that it’s on the verge of getting out when Rey Rosales (Jordi Vilasuso) and Sharon Newman (Sharon Case) land in Las Vegas. They’ll spot Victor shortly after they arrive, so they’ll be on hot on his trail soon enough. Victor will sense that they’re closing in, so he’ll make a huge decision that affects his hidden agenda.

It’s possible Victor will stall so he can get a few things in order first, but he’ll eventually plan to come clean. Victor might believe he can talk Rey and Sharon into containing his secret. He must have some great reasons for keeping quiet, so he may share those before long.

The Young and the Restless spoilers state that Adam Newman (Mark Grossman) is alive, and Victor will reveal that by the end of the week. Rey and Sharon will obviously be blown away by Vic’s unbelievable bombshell. It’s safe to say they never expected this revelation when they decided to seek answers for Nikki Newman (Melody Thomas Scott).

Back in Genoa City, Kyle Abbott (Michael Mealor) will give Lola Rosales (Sasha Calle) a night to remember. He’ll play bartender as he makes some mojitos and dazzles Lola with his skills. Kyle and Lola enjoy flirting before the evening takes a more romantic turn. They’ll dance on the rooftop with the stars above them and a glow in their hearts. That’ll be enough for Lola to take the plunge on making love.

The Young and the Restless spoilers say Lola will join Kyle in the suite he reserved. She’ll be nervous, but he’ll offer plenty of reassurance. Kyle will also make a sweet vow to Lola in Thursday’s Y&R episode. He might promise that their love will last or make some other promise that’s probably ill-advised in the ever-changing soap world!

Whatever the case, Kyle and Lola will finally have sex for the first time – and for Lola it’ll be the first time ever. They should be content with how it turns out, but some Summer Abbott (Hunter King) chaos is just around the corner. We’ll give you updates as other Y&R news comes in. Stick with the CBS soap and don’t forget to check CDL often for the latest Young and the Restless spoilers, updates, and news.