BY Heather Hughes on November 6, 2019 | Comments: one comment
Related : Soap Opera, Spoiler, Television, The Young and the Restless 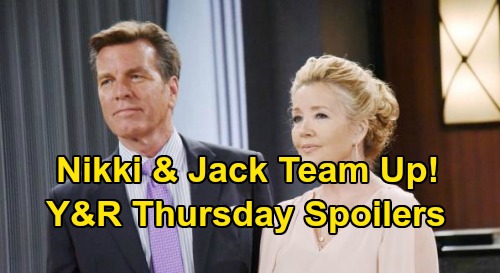 The Young and the Restless (Y&R) spoilers for Thursday, November 7, tease that Jack Abbott (Peter Bergman) and Nikki Newman (Melody Thomas Scott) will tackle a challenge. These friends will team up with an important goal in mind. Nikki’s unofficially helping out with Nick Newman’s (Joshua Morrow) campaign, and Nick recently went to Jack for advice, too. Perhaps Nikki and Jack will have a strategy session to settle on the best possible direction for Nick’s councilman run.

Of course, Chelsea Newman (Melissa Claire Egan) is keeping secrets that could derail the whole campaign. She’ll keep trying to put out her own fires for now, but that’s awfully risky. Sooner or later, secrets tend to be exposed. Chelsea’s been worried about her past posing a threat to Nick’s political aspirations. We all know a soap character’s worst fears typically come true!

In the meantime, Billy Abbott (Jason Thompson) will put himself in a dangerous situation. It looks like he’ll side with Kyle Abbott (Michael Mealor) in the latest family war, but his reaction could be the real problem. Billy is still in a fragile mental state, even if he doesn’t want to admit it. There’s a darkness growing within Billy again, and it’s manifesting in the form of this Jabot power trip.

Kyle may be pleased to have Billy in his corner for once, but he’d better be careful. It could easily be a ploy to stab Kyle in the back. Whatever the case, all this is building to major trouble for Billy. He may make some Adam Newman (Mark Grossman)-related moves on Wednesday as well. Y&R’s setting Billy up for another mental break and the results aren’t going to be pretty.

Other Young and the Restless spoilers say Theo will do a little investigating. He’ll want to find out more about the Abbott clan, which he’s suddenly found himself included in. Theo is Dina Mergeron’s (Marla Adams) grandson and that means Jack wants to embrace him as part of the fam.

However, Kyle will remain wary of Theo’s motives. Will Theo use his investigation for good or evil? Could he even use it for a bit of both? Theo had some sweet moments with Dina and seems genuinely affected by his newfound connection in town, but old habits die hard. Some scheming is still a possibility.

That’s especially true since Kyle will keep pushing Theo’s buttons. Theo is used to being the button-pusher, so he isn’t going to like it if Kyle doesn’t let up. The Young and the Restless spoilers say some exciting developments are ahead in this storyline. We’ll give you updates as other Y&R news comes in. Stay tuned to the CBS soap and don’t forget to check CDL often for the latest Young and the Restless spoilers, updates and news.