BY hellodrdavis on October 31, 2019 | Comments: one comment
Related : Soap Opera, Spoiler, Television, The Young and the Restless 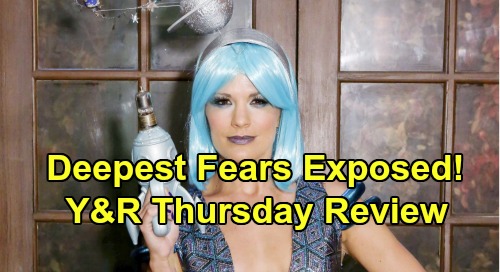 The Young and the Restless spoilers review for Thursday, October 31, tease that various Genoa City residents will have some vivid Halloween nightmares. Phyllis Summers (Michelle Stafford), Rey Rosales (Jordi Vilasuso), Kyle Abbott (Michael Mealor), Nick Newman (Joshua Morrow), and Abby Newman (Melissa Ordway) will each doze off and dream about their biggest fears in pretty comical ways. But each dream reflects the deep-seated issue that each character is currently facing on the show.

Phyllis’ Dream: Being A Failure

First, Phyllis will have a “The Devil Wears Prada” inspired dream, where she’s suddenly the new CEO of Newman Enterprises. Sharon Newman (Sharon Case) will be her hapless secretary, who will usher Jack Abbott (Peter Bergman) and Kyle into the office. They’ll pitch a new accessories line named after Phyllis, but Phyllis will make them disappear with the snap of her fingers.

Phyllis will meet with the Newmans next, but they won’t listen to her or fear her like the Abbotts did. She’ll try to berate them, but she’ll realize that she’s invisible to them. As she listens to them talk about how she’s destitute and living on the street, she’ll get anxious. Finally, Victor Newman (Eric Braeden), who has taken his place back at the CEO desk, will say that anybody can be on top one moment and disappear the next. He’ll then snap his fingers, and she’ll wake up.

Next, Rey will doze off after he and Sharon make love after their 3rd post-reconciliation date. In the dream, which is a 1940’s themed film noir, Sharon and Rey will steal jewelry from the Newman Ranch. Sharon will try to seduce him there, telling him that she knew he had a dark side deep down. They’ll get interrupted by a noise and decide to meet at the designated place.

The dream will then jump to Lola Abbott’s (Sasha Calle) apartment, where Lola will say that Sharon didn’t show up at the designated spot. Adam Newman (Mark Grossman) will appear at the door, and he’ll reveal that he and Sharon are together and that they were always going to end up together. Suddenly, there will be sirens and Rey will realize that Adam tipped off the cops. Adam will tell Rey that \it’s a tough break before he wakes up.

Kyle will fall asleep as he and Lola are watching an 80s movie, and he’ll have an 80s themed dream in which he and Lola show up at the Abbott estate for Thanksgiving. Theo Vanderway (Tyler Johnson), who is dressed like Don Johnson, will answer the door and a raging party will be going on. Kyle will be horrified. Abby will be attending the party, and she’ll have quit her jobs because they’re going to inherit everything, anyway.

Later, Theo will mention Summer Newman (Hunter King) and Lola will get upset. Then Jack will arrive and wonder what’s going on. Theo will proceed to tell Jack amid all the party chaos that he’s had him declared incompetent and that he’s going off to live with Dina Mergeron (Marla Adams). As Jack is carted off by two guys, he’ll tell Kyle that “you should have warned me about him!’ Theo will then proclaim that the party will go on for eternity, and Kyle will wake up, sigh, and turn off the TV.

In Nick’s dream, he’ll walk into his living room to find Nikki Newman (Melody Thomas Scott), Abby, and Victoria Newman (Amelia Heinle) along with a closed casket. Nikki will tell him that “It’s Victor – he’s dead” and Nick will then drop a knife that he’s holding in his hands, protesting that “I didn’t kill him.”

Nick will open the casket and it will be Adam’s corpse inside, not Victor’s. Victor will then appear and say that Adam was the only son worthy of using his name. Chelsea Lawson (Melissa Claire Egan) will appear and tell Victor that Connor Newman (Judah Mackey) will use the name Victor from now on. Victor will say that he’ll be Connor’s father now. Nick will protest, saying that he’ll be there for Connor, too, and raise him as if he were his own son.

Rey will then arrive to arrest Nick, and Nick will go back to the casket to find Adam’s body gone. ‘Look, he faked his own death again,” Nick will say. He’ll call out for Chelsea, but she’ll be gone. Nick will then wake up to Chelsea, who will be home from Adam’s place. She’ll apologize for falling asleep there, and he’ll be glad that she’s home.

Abby’s Dream: Not Making It On Her Own

Abby will dream that she’s at Society, in a take-off of “The Mary Tyler Moore Show.” She’ll be longing for respect and to be taken seriously, but Kyle, Theo, Mariah, and Lola, who are other characters on the show, will continually make jokes at her expense. Each joke will be followed by an obnoxious laugh track, which will annoy Abby.

Abby will end up telling everyone that it’s not nice to make jokes at their boss’ expense, and it will turn out that the joke’s on her, because she’s just the hostess. The Abbott family will actually own Society and Jack put it in Abby’s name because it makes her happy. Everyone will laugh at the idea of Abby being a successful restauranteur.