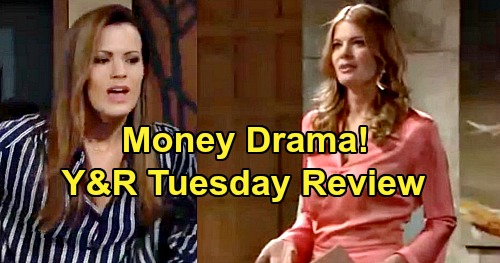 The Young and the Restless spoilers review for Tuesday, August 13, tease that Phyllis Summers (Michelle Stafford) won’t give up on her dream to run the hottest hotel lounge in Genoa City. As Y&R viewers know, Phyllis has been working on the lounge concept for the new Grand Phoenix Hotel. She desperately wants to buy the hotel herself, but she’s had no luck getting financiers.

After finding out that Devon Hamilton (Bryton James) is passing on the hotel, Phyllis will approach Abby Newman (Melissa Ordway) try to persuade her to buy the Grand Phoenix and let her run the place. But Abby will be leery about working with Phyllis. It will take some persuading on Phyllis’ part, but ultimately Abby will agree to buy the hotel on one condition: that Phyllis purchase a large stake in the property so that their interests are aligned.

Ultimately, Abby will give Phyllis one week to come up with the money necessary to partner with her, leaving Phyllis feeling just as desperate as she was before Abby agreed to buy the hotel. Phyllis has pretty much exhausted all opportunities to get a large sum of cash – what will she do now?

Well, it can’t be a coincidence that someone else in Genoa City will suddenly come into a large amount of cash. Chelsea Lawson (Melissa Claire Egan) will learn from her mother Anita Lawson (Catherine Bach) that she and lawyer Daryl Tulane (Gordon Thomson) kept the proceeds from some iffy off-the-book business dealings of Calvin Boudreau’s (John Burke).

Turns out, those proceeds equaled about $5 million. Naturally, Chelsea will be upset with her mother for taking part of Calvin’s fortune for herself, and she’ll end up kicking her mother out. But later, Daryl will arrive with the money in hand (or, more accurately, in two suitcases and a duffel bag) as a peace offering from Anita. Chelsea will end up keeping most of the money and giving Daryl back one of the suitcases for him to split with Anita.

So, will all this money end up going toward the Grand Phoenix Hotel, in some sort of deal with Phyllis? It’s a bit hard to imagine Phyllis and Chelsea going in together on a deal at this point, but stranger things have happened. Perhaps Phyllis will get wind of Chelsea’s windfall and approach her about a deal. Chelsea could always choose to launder the money through the Grand Phoenix!

Later, Adam will spot Christian in the park with Victoria and her kids. He’ll be peeved, but he’ll put his anger aside for the moment and talk with Christian. At just that moment, Nick Newman (Joshua Morrow) will arrive and the two men will start arguing. Christian will then run off and hide, and Victoria will be alarmed when she can’t find the boy.

After a frantic search, Adam will find Christian hiding in the bushes and will get him out by offering to play soccer with him. Christian will seem happy with Adam and they’ll enjoy kicking the ball around a little. But soon Nick will appear and take Christian away.

Unfortunately for Christian, the adults in his life are making things particularly difficult for him. Victoria really isn’t helping matters by refusing Adam visitations, Adam keeps getting in Christian’s face and referring to himself as his dad, and Nick does his share of provoking arguments with Adam. It’s a mess, and Christian’s little hiding episode indicates that he’s feeling the pressure and discomfort. How will he act out next?