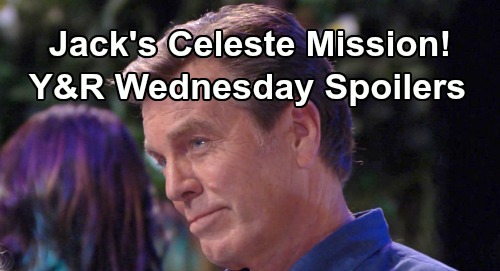 The Young and the Restless (Y&R) spoilers for Wednesday, August 14, tease that Jack Abbott (Peter Bergman) will stick to his goal. He promised Kyle Abbott (Michael Mealor) that he’d fly to Miami and persuade Celeste Rosales (Eva LaRue) to come back with him. Jack doesn’t want the groom going on this mission just before the wedding, so he intends to get the job done himself.

Of course, convincing Celeste may be tough. She’s got a stubborn streak in her, but Jack will give it his best shot. Kyle and Lola’s happiness depends on it! Since Jack’s so darn charming when he wants to be, how can Celeste say no? Jack will do whatever he can to make Lola’s wedding dream come true.

Other Young and the Restless spoilers state that Victor Newman’s (Eric Braeden) plot will pay off. After his recent chat with Nick Newman (Joshua Morrow), Victor got on the phone and put his plan in motion. He insisted his grandson’s future was riding on this, so he’s counting on someone to come through for him.

Victor will be pleased when things indeed work out like he wants. A court order will make it so Adam Newman (Mark Grossman) is blocked from seeing Christian Newman (Alex Wilson). It won’t be long until Adam confronts Victor about his sneaky strategy. He’ll be enraged once again when Victor delivers an ultimatum – most likely to drop the custody case and compromise or risk never seeing Christian at all.

Despite Adam’s anger, he won’t let this setback keep him down. Y&R spoilers say Adam will vow to retaliate, and that’s a promise he’ll keep! Over with Abby Newman (Melissa Ordway), she’ll be thrilled to have Ashley Abbott (Eileen Davidson) in town. Abby will wonder if Ashley might stick around now that Jabot and My Beauty are merging, but Ash may not to commit to moving back.

Regardless, Ashley will be on hand for a pep talk this Wednesday, which should really help Abby. She’ll have a lot to get off her chest since she’s working with risky Phyllis Summers (Michelle Stafford) and unsure of where her new romance stands. Abby likes Nate Hastings (Sean Dominic), but she pulled back out of fear and now he’s pulling back as well.

Ashley might have some useful advice to pass along. She’s had her fair share of ups and downs when it comes to relationships. Ashley may suggest that Abby needs to be honest with both herself and Nate. It’s the only way this can work moving forward.