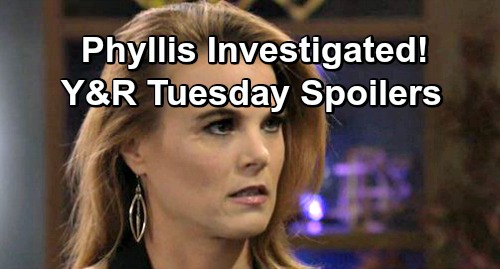 The Young and the Restless (Y&R) spoilers for Tuesday, February 5, tease that Phyllis Summers (Gina Tognoni) will face an investigation. Nick Newman (Joshua Morrow) believes Phyllis is telling the truth about not framing Victor Newman (Eric Braeden). Phyllis has certainly told her fair share of lies as part of the cover-up crew, but her insistence that she wasn’t behind this plot seems genuine.

However, Nikki Newman (Melody Thomas Scott) may still have her doubts. The same goes for Victoria Newman (Amelia Heinle) and even Sharon Newman (Sharon Case). Phyllis insisted it was every woman for herself now, so they all may wonder just how far Phyllis took that. They can’t trust her and she can’t trust them, so this alliance is fractured beyond repair.

Thanks to Katie Abbott’s (Sienna Mercuri) little adventure in the walls, the surveillance equipment is discovered on Monday’s Y&R episode, February 4. Victor points the finger at a potentially alive J.T. Hellstrom (Thad Luckinbill), but Nikki might consider the possibility that he had some help. Since Phyllis tried to form a secret alliance with Sharon, how can they be sure she didn’t try to team up with J.T.?

Perhaps that’s why this investigation will come into play on Tuesday’s new Y&R episode. Regardless, Phyllis will end up on the hot seat in one way or another! Over with Summer Newman (Hunter King), she’ll keep her eye on the prize.

Kyle Abbott (Michael Mealor) is clearly growing sexually frustrated, so Summer will think that’s an angle she can work with. She’ll argue that Kyle deserves more than what he’s getting.

Furthermore, Summer won’t think Kyle can stick to a “just look, don’t touch” policy when it comes to her. She’ll suggest they’re bound to get back together when he gets tired of waiting on Lola Rosales (Sasha Calle).

Summer will just want to go ahead and speed up the process. The Young and the Restless spoilers say Kyle will urge Summer to back off, but Y&R fans know she won’t listen.

Over with Nick, he’ll discuss the case with Michael Baldwin (Christian LeBlanc). They’ll don gloves and look at some of the security equipment together. Nick will hope for any clue that could show Victor didn’t kill J.T. Proving someone set Victor up instead would definitely achieve that.

The Young and the Restless spoilers say Nick will be determined to get Victor off the hook and protect Nikki as well as the others involved. Sadly, things will get far worse before they get better! We’ll give you updates as other Y&R news comes in. Stay tuned to the CBS soap and don’t forget to check CDL often for the latest Young and the Restless spoilers, updates, and news.