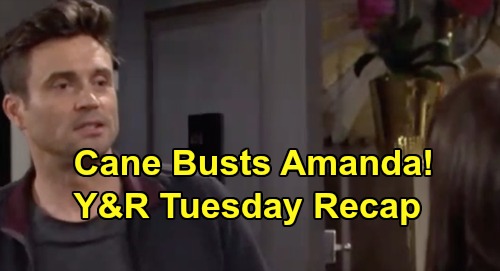 The Young and the Restless (Y&R) spoilers recap for Tuesday, November 12, teases that the hostage crisis will continue. Abby Newman (Melissa Ordway) will offer to open up the hotel safe for Simon Black (Jeffrey Vincent Parise), but he’ll argue that it won’t be nearly enough. Since Simon doesn’t want anyone else involved, he’ll order Abby to put the Grand Phoenix on lockdown.

Meanwhile, Phillip “Chance” Chancellor IV (Donny Boaz) will face Phyllis Summers’ (Michelle Stafford) questions. She’ll be curious about the situation surrounding Katherine Chancellor’s (Jeanne Cooper) will, but Chance will want to focus on the case. He’ll admit he didn’t hire Amanda Sinclair (Mishael Morgan) and has a theory he’s considering, but there’ll be time to discuss all that later.

Over with Amanda, she’ll get updates on the lockdown from Cane Ashby (Daniel Goddard). Amanda will seem nervous after she learns the elevators aren’t moving. She’ll contend that they’re sitting targets now, so Cane will pick up on her over-the-top agitation. He’ll ask where she was locked up and who put her there. Cane will definitely get a sense that Amanda has a past she’s running from.

Chelsea Lawson (Melissa Claire Egan) will be a nervous wreck over the danger Simon’s brought on. She’ll tell Adam Newman (Mark Grossman) not to try anything and push him to just let her handle this. Chelsea will also do her best to reassure Connor Newman (Judah Mackey), who’ll clearly be terrified over this nightmare.

The Young and the Restless spoilers say Chelsea will try to buy some time. She’ll mention the million dollars Anita Lawson (Catherine Bach) wired and promise the rest is coming. Unfortunately, Simon won’t be willing to take Chelsea’s word for that. He’ll confiscate Adam and Chelsea’s cell phones, but Abby will manage to hide hers and hit the emergency security button.

At Crimson Lights, Nick Newman (Joshua Morrow) will be on the lookout for Chelsea since his debate’s about to begin. He’ll chat with Jack Abbott (Peter Bergman) before Paul Williams (Doug Davidson) arrives with Rey Rosales (Jordi Vilasuso). Nick will be stunned to learn the debate’s been canceled due to a hostage situation at the Grand Phoenix. He’ll freak since that’s where Abby and Chelsea are, but Paul will think the police can handle this.

After Paul gets in touch with Chance, they’ll talk about Paul contacting Simon for negotiations. Paul will call Abby, who’ll hand the phone to Simon. Y&R spoilers say Simon will demand $5 million and a private jet to take Connor on. Chelsea will worry this is all her fault, but Adam will insist she’s not responsible for Simon’s actions. He’ll touch Chelsea’s face tenderly and promise to get them out of there.

Back with Chance, he’ll tell Phyllis to text Abby. After Abby reads Phyllis’ message and sees that they need her help upstairs, she’ll nod at the security camera to indicate she’s in. Chance will urge Phyllis to stay behind in the room and be his eyes. Meanwhile, he’ll crawl through the air ducts in hopes of catching Simon by surprise.

Chance will call Phyllis to make certain of where everybody’s standing. They’ll make sure Abby’s prepared for what’s next. Back with Adam, he’ll want to trade places with his son. Adam will work to sell Simon on the idea since he has resources and knows how to get away with a crime. He’ll offer to give Simon a whole new life if he takes him instead of Connor.

Simon will ultimately get fed up with all the lies and pull a gun on Adam. Before he can shoot, Abby will scream to cause a distraction. After Phyllis gives the greenlight, Chance will plop down from the vent and knock Simon to the floor. Moments later, the cops will rush in along with Nick. He’ll wonder what happened, but Chelsea will want to concentrate on Connor. She’ll return to Adam and help him console their boy. Nick looks pretty jealous as Chelsea hugs Connor AND Adam!

Upstairs again, Amanda will fret about the media attention this will bring. Cane will warn that Amanda’s old life is going to catch up with her. She’ll shut down Cane’s attempts to discuss anything, but she’ll seem incredibly relieved when the lockdown’s over.

Elsewhere, Chance and Paul will be pleased with the recent bust. The Young and the Restless spoilers say Chance will praise Abby before Phyllis walks over. Phyllis will suggest that the real work was done behind the scenes.

It sounds like another action-packed episode’s on the way. We’ll keep you posted as other Y&R news comes in. Stay tuned to the CBS soap and don’t forget to check CDL often for the latest Young and the Restless spoilers, updates and news.