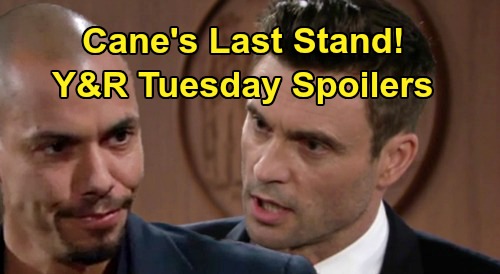 The Young and the Restless (Y&R) spoilers for Tuesday, November 26, tease that some tense moments are on the way. Y&R fans know Colin Atkinson (Tristan Rogers) assured Jill Abbott (Jess Walton) that he righted a wrong. He made it clear that Katherine Chancellor’s (Jeanne Cooper) true wishes were honored, but it seems he was lying as usual. You usually can’t trust anything out of Colin’s mouth!

Colin will change his tune soon – and it could be thanks to Simon Black (Jeffrey Vincent Parise), who insisted he had Colin info the Feds might find useful. If Colin realizes the jig is up, that’d be a good reason to finally drag Cane Ashby (Daniel Goddard) into this. Whatever the case, Colin will indeed accuse Cane soon. He’ll insist he was in on the scam, so Devon Hamilton (Bryton James) will face off with Cane once again.

At the penthouse, Y&R viewers can expect quite a showdown. The Young and the Restless spoilers say Devon will unleash his fury and demand the truth. He’ll wonder why Colin would claim Cane was in on the con if he wasn’t. Cane will probably just suggest his father’s being vindictive. He’ll assure Devon that he wouldn’t tarnish Katherine’s memory like that and beg him to believe his side of the story.

Devon won’t know what to think at this point, so he’ll offer a warning: If Cane is deceiving Devon and was truly involved, he’s going to prison. Devon will make it clear that he won’t tolerate this kind of disrespect to Katherine’s legacy. Unfortunately, it looks like Cane’s innocent act is just that – an act.

Will Devon follow through on that prison threat? He’ll have to make a big decision when Cane owns up to his actions later this week. In the meantime, Chloe Mitchell (Elizabeth Hendrickson) will really step up for Abby Newman (Melissa Ordway). They’ll put up a solid team effort as they work to do damage control for the Grand Phoenix. The hotel could certainly use a reputation boost right about now!

Over with Kyle Abbott (Michael Mealor), he’ll feel protective of his place at Jabot. Although Jack Abbott (Peter Bergman) named Kyle co-COO with Lauren Baldwin (Tracey E. Bregman), Kyle will still be worried. That’s because Theo Vanderway (Tyler Johnson) will get to work on Tuesday. Maybe Kyle will fear Theo could worm his way into a more powerful position. He may want to take Theo down a peg from the start.

Regardless, Kyle will fight for his spot at Jabot and in the Abbott family. He won’t want Theo stepping out of bounds, but Jack’s growing affection for Theo could be a real problem. The Young and the Restless spoilers say the drama’s about to heat up, so stay tuned. We’ll give you updates as other Y&R news comes in. Stick with the CBS soap and don’t forget to check CDL often for the latest Young and the Restless spoilers, updates and news.