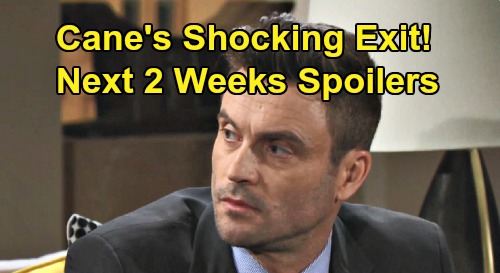 The Young and the Restless (Y&R) spoilers for the next two weeks tease that big things are happening in Genoa City. During the week of November 25-29, Jack Abbott (Peter Bergman) will get emotional over the new memoir. Traci Abbott (Beth Maitland) will let Jack read the completed version, which will set the stage for Peter Bergman’s 30th anniversary special.

This book will be the perfect vehicle to revisit some of Jack’s highs and lows over the past three decades. Y&R fans won’t want to miss all the flashbacks! Later, we’ll get back to the current drama. Theo Vanderway’s (Tyler Johnson) Jabot invasion won’t bring a smooth transition. Kyle Abbott (Michael Mealor) will feel like he needs to defend his spot at the company, so there’s bound to be a power struggle.

Across town, Cane Ashby (Daniel Goddard) will deal with startling accusations. Colin Atkinson (Tristan Rogers) will confess to running a con with Cane’s help. Cane’s denial will be met with suspicion, but Devon Hamilton (Bryton James) will keep digging for the truth. It won’t be long until Cane owns up to his actions, which will set up Daniel Goddard’s exit from Y&R the week of November 25.

Next, Chelsea Lawson (Melissa Claire Egan) will pack up some of her stuff and move in with Adam Newman (Mark Grossman) for a bit. She’ll feel like Connor Newman (Judah Mackey) really needs both of his parents under one roof. Despite giving Chelsea his approval, Nick Newman (Joshua Morrow) will have a hard time with Chelsea’s decision. It’ll bring some new challenges on Chelsea’s end as well, so we’ll see how long “Chick” can keep their relationship intact.

As for Adam, he’ll seek Sharon Newman’s (Sharon Case) help again. Sharon will likely step up for Connor’s sake and hopefully keep the kid’s trauma recovery moving in the right direction. Adam will also meet with Phillip “Chance” Chancellor IV (Donny Boaz). They’ll discuss their Vegas secret and perhaps what they can do to make sure the truth never gets out.

Other Young and the Restless spoilers say Chelsea will feel torn over where her loyalties lie. That may be due to her relationship with Nick and this co-parenting situation with Adam. Victor Newman (Eric Braeden) and Nikki Newman (Melody Thomas Scott) also have some drama to contend with. Their Thanksgiving celebration will take a stunning turn, so you’ll want to see what’s ahead for the Newmans.

At Crimson Lights, several Genoa City residents will gather to help with the annual dinner for the homeless. Mariah Copeland (Camryn Grimes) and Kyle Abbott (Michael Mealor) will end up chatting during a break from serving. Most of their conversations involve advice, so maybe some will be exchanged between the two of them.

During the week of December 2-6, Chelsea Newman (Melissa Claire Egan) will make a shocking move. There’s no word on what that might be, but it’ll likely bring more problems for her romance. Is a breakup rapidly approaching? Time will tell, but we should note that Nick will also do some bonding with Phyllis Summers (Michelle Stafford) that week.

The Young and the Restless spoilers say Nick and Phyllis will reflect on the past, so expect them to connect over their shared memories. Over with Chance, he’ll listen to someone’s pitch. Will Abby Newman (Melissa Ordway) be behind that pitch? She’s clearly eager to get the ball rolling on something here, so she may fish for a date.

Then again, Chance might hear a proposition from someone like Adam or Phyllis. Whatever the case, it’ll be something interesting for Chance to consider. Finally, the past will haunt Devon. The Young and the Restless spoilers say danger could be headed his way, so stay tuned for some bombshells. We’ll give you updates as other Y&R news comes in. Stick with the CBS soap and don’t forget to check CDL often for the latest Young and the Restless spoilers, updates and news.