BY Sean O'Brien on June 1, 2019 | Comments: one comment
Related : Soap Opera, Spoiler, Television, The Young and the Restless 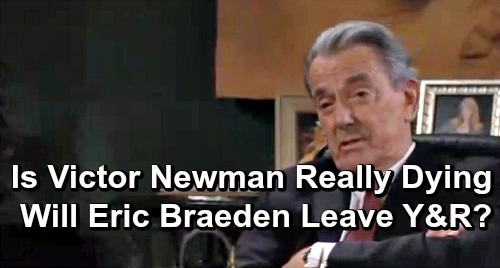 The Young and the Restless spoilers tease that Victor Newman’s (Eric Braeden) seemingly serious health crisis will prime his children for battle. While sibling rivalry is nothing new within this clan and has often been prodded by the Moustache, the patriarch’s age is a major consideration in this instance.

Together, Niktor had two children, Victoria Newman (Amelia Heinle) and Nicholas Newman (Joshua Morrow). Those SORAS’d versions have been in and out of Newman Enterprise positions many times. Currently, however, Vickie is the only one of the two who even cares about the family business.

Nick founded Dark Horse by leveraging his father’s company’s connections and poaching employees. He publicly humiliated Victor, which included spreading health information about him last year. That was during the time that Nick made himself appear to be an assumed dead J.T. Hellstrom (Thad Luckinbill).

It seemed as though Victor’s health troubles, which were tied into J.T.’s physical attack against and later attempt to kill him at Genoa City Memorial Hospital, were left behind. Instead, Y&R is mining the Dark Knight’s vulnerability once more.

Vickie already fears Adam Newman’s (Mark Grossman) ability to push her out, even though he’s shown no genuine desire to run Newman (yet). With that being said, Vickie will take charge and hold onto power if her dad is unable to function as he has been.

Abby Newman (Melissa Ordway) is always wrongly disregarded as unable to compete on the same business plane as her siblings. Her successful start at Society likely makes her a non-player in this potential family corporate intrigue.

Ordway’s character is smart to have gone in her own direction and should let Vickie, Adam, and maybe even Nick battle. Abby is above that fray.

With no confirmed signs, or even buzz about Braeden leaving Y&R, he’ll likely remain an indefinite cast member. Therefore, unless a total real life surprise is coming, Braeden isn’t going anywhere. That’s great, as he’s a respected stalwart among all genuine fans of the show and soap supporters in general. The man’s earned that status long ago.

So, Victor will not die. But his latest health crisis seems ripe for exacerbating the growing conflict among a number of his children. Money and power will be in play, as though this victorious man might finally falter.