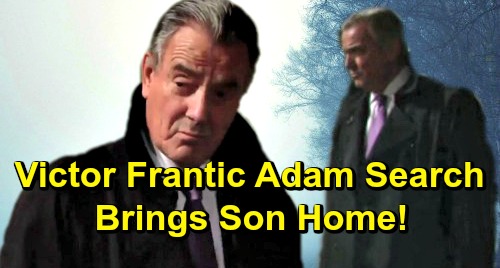 The Young and the Restless (Y&R) spoilers tease that Victor Newman (Eric Braeden) will come through for the people he loves. Nikki Newman (Melody Thomas Scott) and Victoria Newman (Amelia Heinle) are in grave danger, so Victor will help get them out of their cabin jam. Of course, Sharon Newman (Sharon Case) will be rescued from the gas leak as well.

Once Victor and his team save the day, there’ll be a great sense of relief for the Newman clan. The ladies will still have some legal issues to wrap up, but maybe Victor can help with those, too. The Young and the Restless spoilers say he’ll continue to fight for Victoria and Nikki, so it won’t be long until this ordeal is over.

However, J.T. Hellstrom’s (Thad Luckinbill) survival could spark an interesting idea. Here’s a guy that was believed to be dead and gone. J.T. rode through the sewer system to safety after a drain pipe burst, so a lucky break saved his life. Genoa City will marvel at how someone who was buried alive managed to avoid his demise.

After Victor mulls all this over, he might start thinking about another crucial death. It’d be reasonable for Victor to reflect on Adam’s passing and wonder…what if? What if Adam Newman didn’t actually die in that explosion? What if Adam also got a lucky break and could somehow return to GC? These are certainly questions that could cross Victor’s mind, so he might decide to investigate.

Since Victor did everything in his power to bring Victoria and Nikki home, perhaps he’ll do the same for Adam. Since Victor was partially responsible for the mess Adam ended up in, he owes it to his son to check things out. Victor probably wouldn’t get his hopes up about Adam still being alive, but he’d have to consider it. He’ll inevitably face the reminder that no body means no proof of death on Y&R.

Traces of Adam’s DNA were found at the explosion site, but traces of J.T.’s DNA were also found in the soil. That’s another tie-in that could help J.T.’s story flow right into Victor’s search for Adam. Will Victor be the hero who brings his son home?