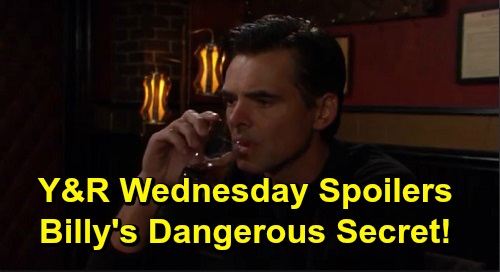 The Young and the Restless (Y&R) spoilers for Wednesday, December 4, tease that some exciting scenes are coming up. We should point out that impeachment hearings coverage is set to continue on Wednesday, so it’s possible Y&R will be preempted. The show will make an official announcement eventually, but just keep in mind that Wednesday’s episode could be bumped to Thursday.

Now let’s talk about all the drama happening in Genoa City. For starters. Devon Hamilton (Bryton James) and Elena Dawson (Brytni Sarpy) will hit a rough patch. Y&R fans know Elena’s been trying to give Devon the support he needs. However, there’s a chance Devon will test Elena’s patience.

Devon’s got a temper and sometimes takes his anger out on loved ones, even if he doesn’t mean to. He’s dealing with a lot right now since Colin Atkinson’s (Tristan Rogers) on the lam and the money’s still missing. Elena may get fed up with Devon’s attitude and attempts to push her away.

Of course, Elena’s frustration with Amanda Sinclair (Mishael Morgan) could be fueling her side of this fight. She may take some of her Amanda anger out on Devon as well, so it’ll just be a difficult day overall for this couple. The Young and the Restless spoilers say Devon and Elena may both need some time to cool off.

Over with Billy Abbott (Jason Thompson), he’ll keep a dangerous secret. He may neglect to mention that he spent the night with Amanda – albeit an innocent one. In Tuesday’s episode, Billy confides in Amanda during the power outage. He’ll probably leave Victoria Newman (Amelia Heinle) out of the loop on that, but will Victoria tell Billy about briefly getting trapped with Rey Rosales (Jordi Vilasuso)?

Regardless, it sounds like more walls will go up for “Villy.” Billy loves his family and desperately wants to make this to work, but perhaps he wants it a little too much. He can’t fit himself into the perfect family man mold without dealing with his issues first. Billy still has to figure out what he really wants out of life, but keeping secrets from Victoria isn’t going to help him achieve anything.

Other Young and the Restless spoilers say Summer Newman (Hunter King) will consider her future. She’ll have to do some reevaluating when it comes to Theo Vanderway (Tyler Johnson) and what she’s looking for moving forward. Theo and Summer have kept things pretty casual, but that can’t work forever. At some point, they have to determine if they’re ready to make a big commitment.