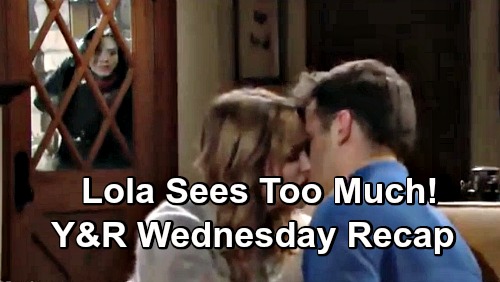 The Young and the Restless (Y&R) spoilers update and recap for Wednesday, February 13, tease that Charlie Ashby (Noah Alexander Gerry) and Mattie Ashby (Lexie Stevenson) will demand answers. They won’t get why Cane Ashby (Daniel Goddard) would skip going to see Lily Ashby (Christel Khalil) on Valentine’s Day. The twins will suggest that Cane and Lily should be together, especially since it’s their anniversary.

Cane will blame his work schedule at first, but Mattie and Charlie will keep pushing. Their dad will eventually argue that Lily’s teaching a class and doesn’t want him to interrupt. Afterward, the twins will show Cane the fairytale love story video they’re putting together. Charlie and Mattie will want Cane to narrate the part about the queen being locked away while her loyal king awaits her freedom.

Naturally, that’ll leave Cane feeling guilty and emotional. He’ll gaze longingly at a picture of Lily once he’s alone. Across town, Lola Rosales (Sasha Calle) will take a call from Mia Rosales (Noemi Gonzalez), who’ll be looking for her husband. Lola won’t want to get caught up in Mia and Rey Rosales’ (Jordi Vilasuso) relationship issues. She’s got plenty of her own to work through anyway!

Next, Lola will borrow Arturo Rosales’ (Jason Canela) truck and head over to win Kyle Abbott (Michael Mealor) back. Unfortunately, Summer Newman (Hunter King) will be trying to achieve the same goal. She’ll share some Champagne with Kyle and contend that she feels bad about how things turn out with Lola. Kyle will insist that Summer isn’t responsible for the breakup.

Later, the sleigh ride driver will appear at the door, so Summer will talk Kyle into enjoying it with her. The Young and the Restless spoilers say the bonding will continue as Summer reflects on Austin Travers’ (Matthew Atkinson) death. They’ll also play a game of hockey before pouring more Champagne.

Before long, Summer will plant a kiss on Kyle. He’ll seem into it at first, but he’ll quickly pull back. Kyle will admit that he still loves Lola, so this feels wrong. Summer, on the other hand, will think it feels so right. They’ll resume kissing as Lola stands by the window and glares at them.

Other Young and the Restless spoilers say Mia will call the cops and urge them to put an APB out on Rey. She’ll argue that this is an emergency. Mia will also track down Arturo and warn him about the potential trouble headed his way. She’ll confess that she called Arturo’s name out during sex with Rey, so this could bring backlash for him, too.

At the cottage, Rey will show up and put it all out there. He’ll insist that a marriage just can’t work if you’re in love with somebody else. Rey will note that’s the case for him. He’ll declare his love for Sharon, but she’ll think he must’ve had a fight with Mia. Sharon will push Rey to go work this out with his wife, but he’ll maintain that he has to be honest with Mia, Sharon and himself.

Y&R spoilers say Rey will reiterate that he loves Sharon and asks if she feels the same. Sharon will admit that she does, so Rey will lean in for a kiss. It’ll all become pretty overwhelming for Sharon at that point. She’ll decide to catch her breath and make some tea, but Rey will make a shocking discovery while she’s gone.

Rey will spot an old phone bill that lists a suspicious 911 call. It’ll be from the night J.T. Hellstrom (Thad Luckinbill) went missing! Rey will call Sharon’s attention to it when she returns and seek the truth.