The Young and the Restless Spoilers: Wednesday, January 1 – Victoria Confronts Billy, Amanda On His Mind – Chelsea Rattled by Adam Kiss 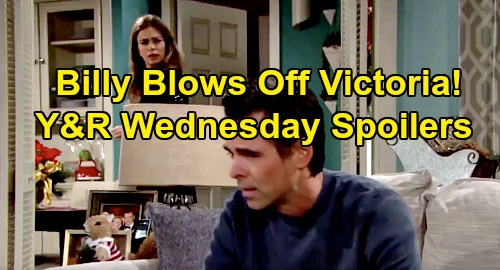 The Young and the Restless (Y&R) spoilers for Wednesday, January 1, tease that Adam Newman (Mark Grossman) will feel certain his New Year’s Eve will be a success. Despite Chelsea Lawson’s (Melissa Claire Egan) wishes, Adam will be attending the same party as Chelsea and Nick Newman (Joshua Morrow). He won’t care that it could cause tension for Nick and Chelsea – in fact, he’d welcome it!

Adam will complicate things even further by planting a kiss on Chelsea before this bash kicks off. Chelsea will let herself get swept up in the kiss briefly, but it won’t be long until she comes back to reality. She’ll insist on leaving Adam’s penthouse and heading over to Nick’s place. Chelsea will claim she has to prepare for the party, but it may be more about running from her feelings in that moment.

Later, the guests will be looking quite dapper as they arrive for the big shindig. Unfortunately, Nick will sense that Chelsea’s drifting in Adam’s direction. He’ll even confide in Jack Abbott (Peter Bergman) as the night wears on.

Nick will feel like he’s been ignoring the warning signs and refusing to accept that Chelsea’s slipping away. Of course, Y&R spoilers say Jack will offer some advice. He may suggest if Nick really examines his heart, he’ll know whether he should fight or throw in the towel. Love isn’t easy, but Jack should have faith that Nick will figure it out.

Other Young and the Restless spoilers say trouble will hit for Billy Abbott (Jason Thompson) and Victoria Newman (Amelia Heinle). For starters, Victoria will make a stunning discovery – perhaps one that helps her catch onto Billy’s deception.

He’s definitely been keeping secrets about where he goes, what he does and who he’s with – namely hanging out at that dive bar with Amanda Sinclair (Mishael Morgan).

Billy will decide to skip celebrating New Year’s Eve with Victoria, so she’ll confront him about why. It’ll lead to a deeper conversation and some tough questions. Victoria will suspect Billy’s gotten into gambling again, but that’s the least of Billy’s problems.

Billy’s a total train wreck right now and doesn’t feel like he can be the kind of man Victoria needs.

The Young and the Restless spoilers say Billy will eventually head back to the dive bar, where he’ll meet up with – you guessed it – Amanda. Billy may not have time for Victoria on New Year’s Eve, but it seems he’ll have time for his almost side piece! Amanda and Billy may not be having an affair yet, but they could be inching toward one if this keeps up.

It sounds like some exciting scenes are on the way. We’ll give you updates as other Y&R news comes in. Stay tuned to the CBS soap and don’t forget to check CDL often for the latest Young and the Restless spoilers, updates and news.