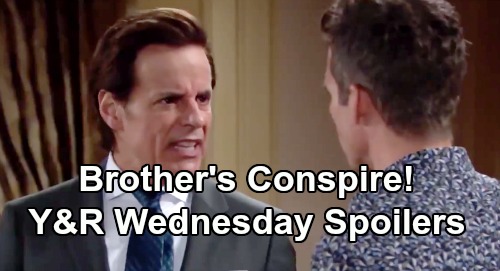 The Young and the Restless (Y&R) spoilers for Wednesday, July 17 tease that Michael Baldwin (Christian LeBlanc) and Kevin Fisher (Greg Rikaart) will conspire to take Adam Newman (Mark Grossman) down. Michael will tell Kevin that he wants to free him from Adam’s clutches and he will have an idea on how to do it.

Michael thinks the key to getting Adam could be Chance Chancellor (John Driscoll). He lets Kevin know that Nick Newman (Joshua Morrow) told him that Adam was working with Chance in Vegas and he thinks they may have been up to something shady, maybe even illegal.

Speaking of people who need to cover their tracks, Phyllis Abbott (Michelle Stafford) will have her work cut out for her. The Young and the Restless spoilers say she will have to find a way out a jam. It’s no surprise that she will throw whoever she has to under the bus to steer clear of danger.

Phyllis managed to escape trouble the past few weeks. There was a time that it looked like she was going to be in real trouble, but she weaseled out of it. But, the Y&R spoilers suggest that she may not be as lucky this time.

The Young and the Restless spoilers tease that Nick will fight for his son. He is doing whatever he has to keep Adam away from his child. Nick knows that Adam is Christian’s biological father, but he doesn’t think his brother is good for him and he will fight to keep him far away from his boy.

Adam will fight to see his son. Both men want to be a part of Christian’s life. Eventually, it will come down to a judge’s decision on who is the better person to raise him.

Unlike Adam and Nick, Jack Abbott (Peter Bergman) is feeling the sibling love as he flies to Paris to see Ashley Abbott (Eileen Davidson). Jack needs some sister time, as it’s been far too long since they have had time to really bond, without Jabot business in mind.

It sounds like there’s some exciting action ahead on the CBS soap opera. Don’t forget to come back to CDL later for more The Young and the Restless (Y&R) spoilers, news, and Casting updates!