BY Olivia Marie on July 15, 2019 | Comments: one comment
Related : Soap Opera, Spoiler, Television, The Young and the Restless 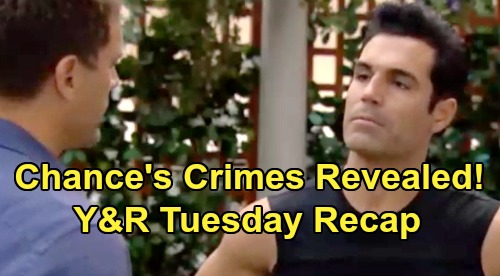 The Young and the Restless (Y&R) spoilers update and recap for Tuesday, July 16 tease that Rey Rosales (Jordi Vilasuso) will update Nick Newman (Joshua Morrow) on the Adam Newman (Mark Grossman) and Chance Chancellor (John Driscoll) situation. Rey reports that, while Chance was a stand-up guy, in recent years he’s turned to money laundering and other shady business dealings.

Nick will be shocked to hear this scoop and he will demand that Rey find a way to connect Adam to one of Chance’s shady business deals. Y&R spoilers say that will make it harder for Adam to get custody of Christian Newman (Jamie and Alister Tobias).

At Crimson Lights, Nikki Newman (Melody Thomas Scott) and Victor Newman (Eric Braeden) plan a family get together. Nikki thinks that with his health situation, they should spend all the time they can together. The Young and the Restless spoilers state that Nikki wants to include all the children, even Adam, but Victor thinks inviting his youngest son is a bad idea.

Meanwhile, at Society, Cane Ashby (Daniel Goddard) will update Jill Atkinson (Jess Walton) on his new job. He will detail how good it feels to help others and how he feels as if he is really making a difference. Cane will explain how he and Traci Abbott (Beth Maitland) are helping each other. He adds that he’s her inspiration for her newest novel.

The Young and the Restless spoilers say that Jill worries that Traci is using Cane, but he immediately shuts her down. He says they are helping each other and Traci has really helped him move on.

Billy Abbott (Jason Thompson) joins them and Jill mentions that Cane and Traci are going to New York together. Billy doesn’t like that and he wonders what kind of con he’s playing with his sister. Jill interrupts Billy’s rant, stating they enjoy each other’s company and there is no game being played between them. Jill tells Cane to have a great time in New York and she is happy to see him doing so well.

At the Abbott mansion, Jack Abbott (Peter Bergman) told Traci that he’s inspired by her. Y&R spoilers say that he thinks he should follow her lead and make some big changes in his life too. Traci gives him a list of his recent accomplishments and she cannot wait to see what he will do next.

Cane shows up at the Abbott mansion and he tells Traci it’s okay if she’s having second thoughts about him tagging along. He reveals that Billy lost it when he heard about heir trip. Traci reassures Cane that she wants him to go with her and they will have fun together. They head to the airport to leave for NYC.

At Nick’s house, Chelsea Newman (Melissa Claire Egan) is frustrated with her mother, Anita Lawson (Catherine Bach), who wanted details on Calvin Boudreau’s (John Burke) will. Victor appears and he has a favor to ask Chelsea. He wants to see Connor Newman (Gunner and Ryder Gadbois). Victor promises to not say anything about Adam. He just wants to see his grandson. Chelsea agrees and she hands him the location of his summer camp.

Nick appears and Victor invites them both to a Newman family dinner. The Young and the Restless spoilers tease that after Victor leaves, Nick urges her to go with him. She isn’t sure it’s a good idea as Adam would be upset about it. After mauling it over, she decides to go anyway, she cannot let Adam dictate her life!

The Young and the Restless spoilers reveal that Jill sees Jack in the park and approaches him. Jack tells her that he’s concerned about Victor. He thinks there is something really wrong with him and he admits that worries him. He acknowledges the fact they aren’t close, but if something happened to the Mustache, it would break his heart.

At Crimson Lights, Billy sees Jack and mentions that he’s not himself. Billy wonders why he isn’t happier as Jabot has really good numbers lately. Billy thinks he should go see their sister Ashley Abbott (Eileen Davidson) to get away and “check out the competition.”

It looks like there’s a lot of drama happening this week on Y&R. Don’t forget to come back to CDL for more The Young and the Restless (Y&R) spoilers, news, and casting updates!