The Young and the Restless Spoilers: Wednesday, July 24 Update – Who Will Be Christian’s Temporary Guardian – Theo’s Revenge On Kyle 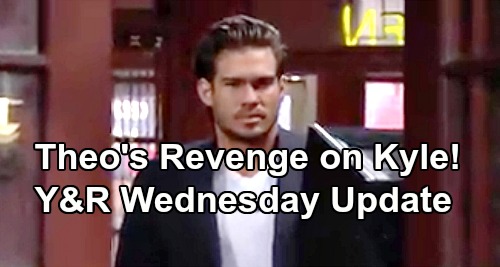 The Young and the Restless spoilers update for Wednesday, July 24, tease that Adam Newman (Mark Grossman) and Nick Newman (Joshua Morrow) will learn that they actually accomplished something together – their mutually horrible behavior during the custody hearing seriously put off the judge.

Both Adam and Nick will get word that the judge has reached a decision, and as they are waiting, they’ll get into another argument over familiar territory. The judge will then appear and tell them to knock it off, then berate them for their deplorable behavior and disgusting tactics. He’ll inform them that he’s denying both of them custody of Christian Newman (Jamie and Alister Tobias).

The judge will then suggest that each party select someone – perhaps a family member – with whom Christian can be placed. Nick will immediately run to Victoria Newman (Amelia Heinle), and Adam to Sharon Newman (Sharon Case), and ask them to step up as Christian’s temporary guardian. Both will agree, but for Sharon, it’s pretty clear that the decision will cause major problems in her relationship with Rey Rosales (Jordi Vilasuso).

Rey is of the opinion that Adam is manipulating Sharon with the request, and he’s probably absolutely right that Adam will request special access to Christian if he’s ultimately placed with Sharon. And just the fact that Sharon has agreed to step up for Adam may be enough to cause Rey to bolt from the relationship – Y&R viewers will have to wait to see just how much of this Rey is going to tolerate.

Of course, who the judge picks to care for Christian is anyone’s guess at this point. On the one hand, Victoria would seem to have an advantage since she doesn’t have the troubled history that Sharon has, which the judge could frown upon. On the other hand, Sharon did help raise Christian, and so Christian would be familiar and comfortable in her home.

Next, on the new episode of Y&R on Wednesday, July 24, Theo Vanderway (Tyler Johnson) will cause trouble when he spills some details to Celeste Rosales (Eva LaRue). Theo will fill her in on Kyle Abbott’s (Michael Mealor) partying history, his marriage to Summer Newman (Hunter King), and Lola Rosales’ (Sasha Calle) liver transplant.

That will set off a big chain of events. Celeste will show up at Society, peeved that Lola, Rey, and Arturo Rosales (Jason Canela) kept Lola’s surgery from her, and she’ll think that Lola’s insane for wanting to be with Kyle. Celeste and Lola will go back to the apartment and argue, and Celeste will leave angry, saying she’s not going to stay where she’s not welcome.

Then, Kyle will track Theo down at Crimson lights and physically assault him for purposefully causing trouble. He’ll wind up telling Theo that he’s dead to him, and that if he hurts Summer, he’ll pay. But Theo will wind up looking pretty unrepentant, and it looks like more trouble may be brewing there.

Of course, there’s not much more that Theo can really do to Kyle, except continue to work on Lola’s insecurities about Kyle’s past and mess with Summer. We could very well see Theo purposely try to drive a wedge between Lola and Kyle by bringing out Kyle’s protective side where Summer is concerned.