BY Heather Hughes on June 25, 2019 | Comments: one comment
Related : Soap Opera, Spoiler, Television, The Young and the Restless 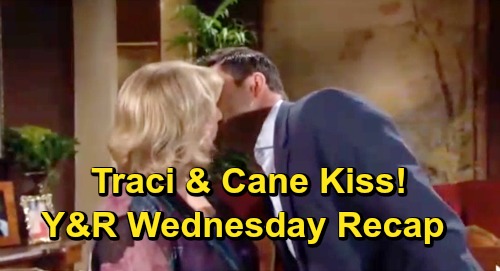 After the ladies chat and toast to Lola, a problem will arrive. Summer Newman (Hunter King) will overhear Kyle Abbott (Michael Mealor) gushing about the event and decide to crash it. The Young and the Restless spoilers say Summer will face backlash from Mariah and Tessa, but Lola will insist one more guest is fine. She owes Summer her life and will be eternally grateful.

Summer will actually end up being quite pleasant to Lola, who will ask about Phyllis Summers (Michelle Stafford). Once Summer assures Lola that her mom’s OK, she’ll thank Lola for letting her open up recently. Next, Abby will push Lola to check out her presents, which all happen to be for the wedding night.

Summer will ultimately pipe up with something she wants to tell Lola. She’ll hope they can put the past behind them and move on. Summer will insist she wishes Kyle and Lola well in their new marriage. Lola will seem touched by the effort Summer’s making, but Summer will still think it’s time to head out.

Once Summer’s gone, Abby will reveal her final surprise: Celeste Rosales (Eva LaRue). The Young and the Restless spoilers say Lola will happily hug her mom. Celeste will make some cracks about the lingerie, but Lola will suggest they’re all just having some fun. Her mother will be excited about watching Lola tie the knot soon.

Other Y&R spoilers state that Jack Abbott (Peter Bergman) will get a visit from Phyllis. She’ll have a gift basket to pass along, but Jack will wonder what she actually wants. Phyllis will end up bickering with Jack about her counterfeit site. She’ll also mention that she’s now the CEO of Dark Horse, which will agitate Jack even further.

In the end, Phyllis will suggest she forgives Jack. She’ll also forgive a stunned Lauren Baldwin (Tracey E. Bregman) when she walks in. Once Phyllis leaves, Jack will examine the gift basket for listening devices. He’d been down that road before thanks to Ashley Abbott (Eileen Davidson), so it’s wise to check!

Afterward, Lauren will ask about Jack’s love life. He’ll admit he’s enjoyed hanging out with Mallory (Wendy Benson Landes), but he won’t know if they’re going to be a thing. However, Jack will certainly be thankful to have Lauren as a dependable friend.

Over with Traci Abbott (Beth Maitland), she’ll finish up her novel. The tale will end with Flynn (Daniel Goddard) figuring out that Iris (Christel Khalil) is guilty. She wanted her husband to take the fall for his mistress’ murder. Iris will shoot Flynn, who will fire back and bleed on the floor as Velma (Beth Maitland) rushes to his side.

Velma will order Flynn not to die on her, so he’ll reply that there’s not a chance. He’ll ask who would boss Velma around if he were gone. After Flynn and Velma share a kiss, Traci will conclude with “The End.” She’ll still be thinking about the characters’ kiss when she bumps into Cane Ashby (Daniel Goddard) at the coffeehouse.

Cane will be thrilled over Traci finishing her novel, so they’ll head back to the Abbott mansion for a celebration. After they toast with wine, Cane will urge her to share some of her story with him. Traci will read a bit to an impressed Cane. He’ll note that Velma saved Flynn, but she’ll think they saved each other. Cane will eventually call Traci incredible before he leans in for a kiss.

At Kyle and Lola’s apartment, Theo Vanderway (Tyler Johnson) will show up with some beer. They’ll talk about Summer and whether she’s truly over Kyle. Theo won’t be so sure, but he’ll confess that he really likes Summer. Even so, Theo won’t be looking to settle down with anyone right now. The conversation will shift to Kyle’s bachelor party, which Kyle will grudgingly agree to let Theo plan.

Back at Crimson Lights, Phyllis will look intrigued as she watches Summer with Theo. The Young and the Restless spoilers say Theo will admit Kyle bores him. He’ll contend that he’s going to throw a bachelor party that Kyle will never forget. The soapy translation of that is: big trouble’s brewing!

It sounds like some fun scenes are coming up. We’ll give you updates as other Y&R news emerges. Stay tuned to the CBS soap and don’t forget to check CDL often for the latest Young and the Restless spoilers, updates and news.