The Young and the Restless Spoilers: Wednesday, March 20 – J.T.’s Attack Begins at Abbott Cabin – Victor to the Rescue

BY Heather Hughes on March 19, 2019 | Comments: one comment
Related : Soap Opera, Spoiler, Television, The Young and the Restless 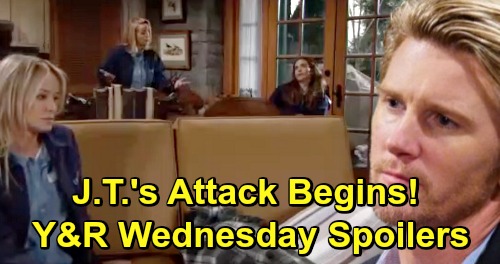 The Young and the Restless (Y&R) spoilers for Wednesday, March 20, tease that J.T. Hellstrom (Thad Luckinbill) will plot his next move. At the cabin on Tuesday, J.T. shows up out of breath in a cop uniform. He lurks outside and gazes in the window, so it’s clear that trouble’s brewing.

Nikki Newman (Melody Thomas Scott), Victoria Newman (Amelia Heinle) and Sharon Newman (Sharon Case) will do their best to relax on Wednesday’s new Y&R episode, March 20. Unfortunately, scheming J.T. will spook them sooner or later. By the time night falls, J.T. will be ready to unleash his vengeful wrath.

The worst part is Nick Newman (Joshua Morrow), Billy Abbott (Jason Thompson) and Rey Rosales (Jordi Vilasuso) won’t have a clue – at least not at first. They’ll end up wondering why J.T. isn’t showing up at the Dark Horse warehouse as planned. Tuesday’s trap is already a failure, so they should figure that out on Wednesday.

Victor Newman (Eric Braeden) will have a bad feeling about what the guys are up to. Since they’ve determined that J.T. is the tormentor, they know how sneaky he can be. As a security expert, J.T. understands how to avoid cameras and show up when you least expect him. He’s been able to fly under the radar the whole time, so Victor may think they need extra protection at the cabin ASAP.

J.T. is an abusive monster who could easily knock out the couple of guards that are outside. He’s a threat worth worrying about as Y&R fans will soon see! Y&R spoilers say J.T. will play games with the ladies. It looks like he’ll cut the power just to increase their fear. They’ll arm themselves with objects from around the cabin, but they won’t be prepared for that terrifying moment when J.T. shows his face!

Thankfully, Victor will leap into action. He’ll make sure Victoria, Nikki and Sharon get some backup before long, but they’ll just have to handle J.T. in the meantime. Over with Rey, he’ll do whatever he can to throw Christine Williams (Lauralee Bell) off the trail. Since Rey will still believe the original plan is in play, he won’t want Christine sending anyone out to the cabin and screwing things up.

However, Rey will raise major suspicions in the process. The Young and the Restless spoilers say Rey’s loyalty will be put to the test, but he’ll stick to his guns and try to help the woman he loves. He owes it to Sharon if he ever wants another shot with her.