BY Heather Hughes on November 12, 2019 | Comments: one comment
Related : Soap Opera, Spoiler, Television, The Young and the Restless 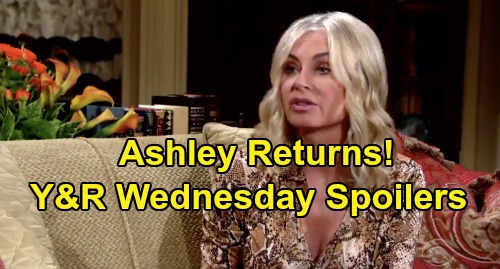 The Young and the Restless (Y&R) spoilers for Wednesday, November 13, tease that Chelsea Lawson (Melissa Claire Egan) will get grilled. She’ll be relieved to have survived the hostage crisis along with Adam Newman (Mark Grossman), Connor Newman (Judah Mackey) and Abby Newman (Melissa Ordway), but it’ll be time for answers. Chelsea’s the reason Simon Black (Jeffrey Vincent Parise) came to town, so she definitely owes Adam a full explanation.

Adam will pummel Chelsea with questions following the chaos. He won’t blame he for Simon’s out-of-control behavior, but he’ll still want to know how it got this far. Adam will probably wonder why Chelsea didn’t trust him enough to share. Their son was at risk, so Adam should’ve been brought in the loop.

Adam was trying to throw millions of dollars at Phyllis Summers (Michelle Stafford) not too long ago, so he obviously had some to spare. There’s no reason why Chelsea couldn’t have asked Adam for the money. He may argue that Chelsea should’ve come to him the second Simon threatened Connor – or even before. Adam clearly cares about Chelsea and would’ve done anything to help her.

Of course, Chelsea will also have to deal with questions from Nick Newman (Joshua Morrow). Will Chelsea divulge as much to Nick or give him a censored version of the story? Regardless, Nick’s campaign is set to face a serious blow by the end of the week. It seems likely Chelsea will play a role in that.

Meanwhile, Amanda Sinclair (Mishael Morgan) will speak with her fake client. Phillip “Chance” Chancellor IV (Donny Boaz) didn’t hire Amanda, so he’ll be eager to interrogate her. Jill Abbott (Jess Walton) suspects Colin Atkinson (Tristan Rogers) is involved here, and Chance knows about her suspicions thanks to Cane Ashby (Daniel Goddard). Chance may wonder if Amanda can offer any info on Colin or back up that hunch.

The Young and the Restless spoilers say Amanda will be forced to confess this week, so Chance may pry something out of her. Amanda at least knows an “old jerk” roped her into all this, which certainly sounds like Colin! She may admit some other hints she’s uncovered that just don’t add up.

Across town, Ashley Abbott (Eileen Davidson) will return to Genoa City and land in Abbott family conflict. Y&R fans have seen some major tension between Kyle Abbott (Michael Mealor) and Theo Vanderway (Tyler Johnson). Billy Abbott (Jason Thompson) is on Kyle’s side and considers Theo a real threat. Ashley, on the other hand, will see a little of herself in Theo and show her support.

The Young and the Restless spoilers say Ashley will sit down for a nice chat with Theo. They’ll get to know each other and connect over feeling like outsiders. Neither one of them is a blood Abbott, so Ashley will think that’s something to bond over. She’ll ultimately offer Theo a job and push him to come work for her in Paris.

Theo will face a difficult decision, so stay tuned to see what Summer Newman (Hunter King) has to say about it. We’ll give you updates as other Y&R news comes in. Stick with the CBS soap and don’t forget to check CDL often for the latest Young and the Restless spoilers, updates and news.