The Young and the Restless Spoilers: Week of January 7 – Victor Learns The Truth – Hot Temptation and Betrayal 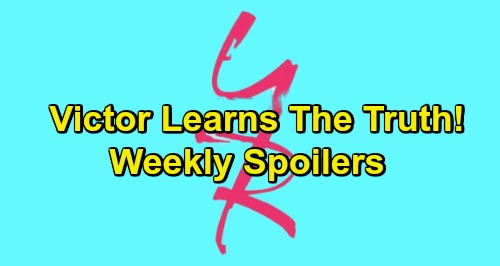 The Young and the Restless (Y&R) spoilers for the week of January 7-11 will bring some tricky moments in Genoa City. Sharon Newman (Sharon Case) will certainly face her fair share of them. A compromising position will leave Sharon with some explaining to do, so this will likely involve Rey Rosales (Jordi Vilasuso).

It’s possible Mia Rosales (Noemi Gonzalez) will catch Sharon and Rey getting too close for comfort. She’s already wary of their connection, so this could really rev up her suspicions. Then again, Sharon’s tight spot could be something that ties in with the cover-up crew. Rey’s interest will be piqued by Sharon’s actions on new Y&R episodes the week of January 7-11, so she could have a hard time getting him off her back.

Over with Arturo Rosales (Jason Canela), he’ll battle some temptation. When Mia first arrived in town, Abby Newman (Melissa Ordway) immediately developed cheating fears. She’s done enough betraying to know when there’s a threat. Arturo convinced her he was all in on their romance, but how can he be sure of that? The truth is he can’t be when Mia’s pull is so strong.

While Arturo tries to stay faithful, Phyllis Summers (Gina Tognoni) will land in hot water. She’ll go too far and ignite quite a war. The Young and the Restless spoilers say some serious Newman family conflict is on the way. It looks like Phyllis will land in the middle of it thanks to her current connections on canvas.

Phyllis is dating Nick Newman (Joshua Morrow) and stuck in an unpleasant alliance with Sharon, Victoria Newman (Amelia Heinle) and Nikki Newman (Melody Thomas Scott). All of that will add up to disaster when Phyllis does something to get on the Newman clan’s bad side. It’ll bring some serious tension and put the deadly posse’s secret at risk.

Speaking of that secret, Nikki may fill Victor in on the truth and get some advice. Y&R spoilers say they’ll come to an agreement next week. Victor may urge Nikki to keep her mouth shut about what happened to J.T. Hellstrom (Thad Luckinbill). He might think he’s got a better shot at beating the charges.

Nikki may agree to that, but only if things work out in the end. It’s doubtful she’d stand by and let Victor actually go down for a murder he didn’t commit. Finally, The Young and the Restless spoilers say a big return will shake things up. Mackenzie “Mac” Browning will once again hit GC and stir up some J.T. trouble.

It sounds like a great week’s ahead on the CBS soap. We’ll give you updates as other news comes in. Stick with Y&R and don’t forget to check CDL often for the latest Young and the Restless spoilers, updates, and news.