The Young and the Restless Spoilers: Week of May 27 Preview – Victor’s Deadly Health News – Dina Feels Dumped – Neil’s Will Reading

BY Heather Hughes on May 23, 2019 | Comments: one comment
Related : Soap Opera, Spoiler, Television, The Young and the Restless 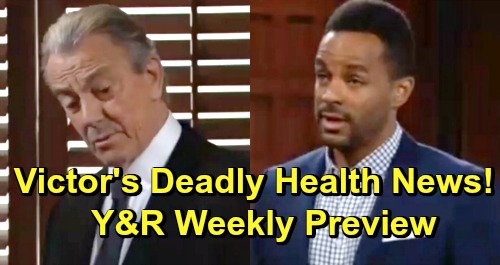 The Young and the Restless (Y&R) spoilers preview for the week of May 27-31 tease that some hot drama’s coming up. For starters, Victor Newman’s (Eric Braeden) efforts to secure a second chance with Adam Newman (Mark Grossman) will make even more sense. Dr. Nate Hastings (Sean Dominic) will report back to Victor with some bad news. It sounds like maybe Victor had some test results that came in.

However, Nate will insist that doesn’t mean they can’t fight this – and Victor will assure Nate that they’ll indeed fight. Does Victor have a serious illness? Is “The Moustache” dying? It certainly seems that way, especially since The Young and the Restless spoilers say Victor is keeping one more secret from his family. A deadly diagnosis would certainly fit the bill.

Meanwhile, an important meeting will get underway in the Abbott home. Y&R fans can expect Ashley Abbott (Eileen Davidson) to return, but it won’t be for a pleasant reason. Jack summoned his sister to help deal with Dina Mergeron’s (Marla Adams) move. She needs to be placed in a facility where the staff can give her the proper care and keep her safe.

Of course, that doesn’t mean it’ll be easy for the Abbott clan to say goodbye. They can certainly visit Dina wherever they’d like, but it’s not the same. Plus, there’ll be concerns about how Dina’s going to react. As Jack, Ashley, Traci Abbott (Beth Maitland) and Abby Newman (Melissa Ordway) gather for a discussion, Ash will suggest that the difficult thing will be explaining this to their mother.

That’s when Dina will march in and declare that she already knows. She’ll seem quite upset as she snaps that they all just want to get rid of her. The Young and the Restless spoilers say this will be a tricky situation for all parties involved. The Abbotts just want what’s best for Dina, but they may have a tough time convincing her of that.

Another meeting will kick off later, but this one will involve the reading of Neil Winters’ (Kristoff St. John) will. Michael Baldwin (Christian LeBlanc) will tell everyone what Neil’s last wishes were and what he left to each of them. Jack, Ashley, Victor, Nikki Newman (Melody Thomas Scott), Cane Ashby (Daniel Goddard), Lily Ashby (Christel Khalil) and Devon Hamilton (Bryton James) will all listen intently.