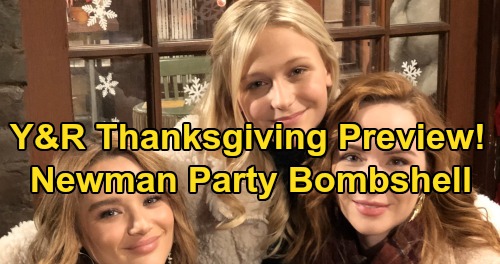 The Young and the Restless (Y&R) spoilers tease that Thanksgiving will be here before you know it. Y&R’s turkey day should be thrown off by impeachment hearing preemptions, but Genoa City will still celebrate. It’s never too late to be grateful! We’ll see some heartwarming family reunions, but things will take a shocking turn at one important gathering.

First, let’s talk about an exciting return. The Young and the Restless spoilers say Alyvia Alyn Lind will reprise her role as Faith Newman. When Y&R revealed that Faith had gone off to boarding school, many viewers feared she’d return rapidly aged. However, that hasn’t happened and there seemingly no plans to SORAS Faith anytime soon.

It honestly wouldn’t make much sense to age Faith at this point. She’s growing up fast, so why not just wait a bit? The Young and the Restless could build a nice teen group around Faith when the time comes. It might work better than their last attempt, which involved rapidly aging the Ashby twins and putting Reed Hellstrom (Tristan Lake Leabu) back in the mix.

Since Y&R doesn’t have much use for teens at the moment, it makes sense to just keep their usual Faith and have her pop in for visits – just like this one for Thanksgiving. Faith should catch everyone up on how she’s doing at boarding school. She’ll enjoy some quality time with her loved ones, including her big sisters, Mariah Copeland (Camryn Grimes) and Summer Newman (Hunter King). It looks like they all have some fun scenes coming up as Thanksgiving approaches in GC.

As for Theo Vanderway (Tyler Johnson), he’ll undoubtedly be invited to the Abbott family get-together. That may not be as horrible as Kyle’s Halloween nightmare, but it could certainly bring some awkward tension. Jack Abbott (Peter Bergman) will hopefully be able to bring Kyle and Theo together – if only for a night.

The Newmans will hold a gathering of their own at the ranch, and it’ll come with a major bombshell. This family will face an unexpected twist at their holiday party, so it’ll be interesting to see that’s all about. There’s a good chance Adam Newman (Mark Grossman) will be involved somehow, but let’s hope Victor Newman (Eric Braeden) and Nikki Newman (Melody Thomas Scott) can keep the peace!