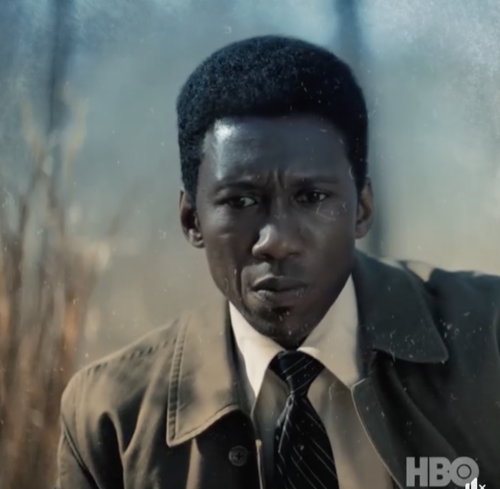 Tonight on HBO their crime drama True Detective airs an all-new Sunday, January 13, 2019, season 3 premiere called, “The Great War and Modern Memory.” We’ve got your True Detective recap down below! On tonight’s True Detective season 3 premiere as per the HBO synopsis, “Season 3 begins with the disappearance of a young Arkansas boy and his sister in 1980, which triggers vivid memories and enduring questions for retired detective Wayne Hays, who worked the case 35 years ago with his then-partner Roland West. What started as a routine case becomes a long journey to dissect the crime and make sense of it.”

Wayne Hays (Mahershala Ali) is at a deposition in 1990, going over a case. We see a much older version of Hays, he is listening to a recording of the deposition, he looks in his drawer that has a gun.

Hays recounts a case, February 7th, 1990, it was the day Steve McQueen died. Two children ask their dad if they could drive their bikes to the playground and go to a friends house, he tells them to be home by 5:30 pm. The children past through the town and wave at people along the way. Three young men in a purple Volkswagen Beetle watch the children past them. Hays is asked what he was doing that evening, he says he was west doing his regular shift, working cases.

Back to the father of the children, its dark and realizes the children didn’t come home. He hears a dog barking in the distance. His father calls around to the children’s friends to see if they went there, but no luck so he heads out in his car to look for them.

We the young men that were watching the children, they are drinking and dancing to music outside, one is playing around on one of the children’s bikes.

Meanwhile, Hays and his partner are driving through town when they get a call to head to the missing children’s house. William and Julie never came home and their father can’t find them.

Going back to the older Hays, he is being questioned about the case. He talks about his wife, how much he misses her since she passed away.

They look through the children’s things, their first thought is that the wife took off with the children. But, they dropped the theory two minutes later when the mother shows up at the house and the two get into an argument.

Police are riding around the city streets trying to find the children while Hay is still looking around the house and finds Playboy magazines, the father claims to not know where they came from. Hays looks in a closet and notices a tiny hole punctured in a wall which looks into one of the other rooms.

They question a neighbor and she says she didn’t see the children, but she did notice some older boys in a purple Volkswagen beetle. Other people claim to have seen the children pass them and say that sometimes they go to Devil’s Den. Other neighbors mention a man that drives a cart and picks up trash.

Hays is outside looking around, trying to find a clue.

The next day, the children are still missing. Hays and his partner head to the children’s school. They question a teacher and ask to speak to a student, Freddy Burns. Hays shows Freddy a photo of the two children, he says he saw them riding their bikes when they drove past them. They question another boy, Hays shows the photo to this boy and he says he saw them, they were out playing in the park. He says there were other kids out there playing with firecrackers, but he didn’t speak to them.

The teacher says that Will was a good student, a nice boy, very sensitive. Hays asks her about Freddy, Ryan, and Jason, she says they are their own little group, outcasts with tough attitudes.

Hays’ partner thinks the boys are lying. Hays is not sure. His partner teases him about the pretty teacher, Amelia. Their next stop is to check out the trash man. They go to his home, he is not there but the door is open. They go inside, Hays finds a picture of a woman with two children, another photo of men in the army together.

The older Hays stops the interview, he doesn’t want to talk about it anymore. He goes into another room of his house and starts to think back.

Hays and his partner are out in the fields looking for clues with other police. Hays finds some tire marks in the dirt. He walks towards an abandoned tower and starts to go up the steps. When he arrived inside the tower, he finds empty bottles of alcohol. Hays continues to walk through the fields when he finds one of the bikes. He then finds a straw bride doll. Continuing to walk, he sees a cave, he finds the boy inside dead, with his hands in prayer.

The older Hays is looking at a book that Amelia wrote, Life and Death and The Harvest Moon, Murder, child abduction and the community is destroyed.

The police are in the cave looking for clues, Hays tells his partner to bag all the dolls, there were more of them. There is still no sign of the girl.

Back to the deposition, Hays has had enough. One of the men says that the girl, they ran the prints in the database, there was an after-hours burglary two months ago, they worked the store for fingerprints, Julie Purcell, she is alive.

Hays leaves the cave, he says he is going back out, they have to find her.