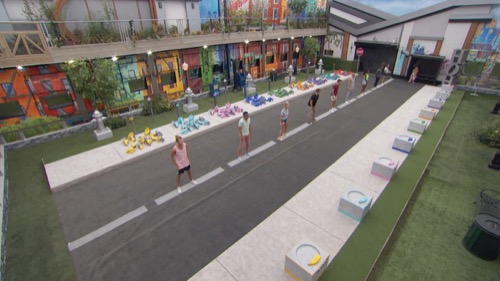 Tonight on CBS Big Brother 22 airs with an all-new Thursday, September 20, 2020, episode and we have your Big Brother 22 recap below! On tonight’s Big Brother season 22 episode 20 “HoH and Nominations,” as per the CBS synopsis, “Tonight on Big Brother it is the end of HoH competition and a new Head of Household will be named.  Following the competition, the new HoH will nominate two houseguests for elimination.”

We continue with the HoH competition, Tyler is so pumped that he got to live another day in the Big Brother house. David doesn’t know what happened, he wanted to create 4 – 4 tie, but somebody flipped. He agreed to give Ian his vote because he wanted to put more blood on Dani’s hands. Two hours before the live eviction, Ian thought he had the votes for a tie vote. Da’Vonne needed to make sure that David was voting for Ian to stay, she doesn’t want to be the only one and stick out like a sore thumb.

Da’Vonne goes to speak to David, he says yes, he promised to save Ian. Nicole asks Da’Vonne if David is voting to keep Ian, she says yes. Nicole knows that she doesn’t have the votes to save Ian, and putting Dani in a bad spot puts her in a bad spot, so she is telling Da’Vonne, David, and Kevin anything they want to hear. Kevin runs to Dani and tells her the plan, that the four are going to vote to keep Ian, and she will have to make the deciding vote. Dani then tells Nicole that she knows everything, and she cannot vote to keep Ian.

Back in the HoH competition, everyone is trying their best to win. Kevin wants to win to get revenge on being put on the block three times. David wants to win to make big moves in the house. It’s getting down to the end, Memphis thinks he is the first one to complete his puzzle, he is the new HoH for this week. This is the second HoH win for Memphis this season, and the first time, he put up David, so David is very nervous that Memphis will come after him again.

Da’Vonne thinks David set her up because the final vote to save Ian was 3 votes to stay. Little does she know, it was Nicole who flipped. Meanwhile, Dani doesn’t like David, and she is going to campaign to get rid of him. Dani is excited that she and Nicole are in the clear right now. David asks Kevin what happened, he says he doesn’t know. Kevin thinks it is David who lied and turned.

Nicole is having a hard time lying to everyone, but she knows that truth in the Big Brother house doesn’t set you free. Da’Vonne is pretty sure that David flipped on them and doesn’t know what is wrong with him. Da’Vonne asks David why he flipped, he says he didn’t and they are being set up. David gets angry and starts screaming, he is being set up and doesn’t like that someone lied to him. Dani overhears him and is thrilled that he is that upset. David is with Kevin and he tells him that he voted the way he promised, he doesn’t understand why it is falling back on him.

He feels like he is being set up, and Nicole is working with Dani. Kevin thinks that maybe Nicole did flip to save face for her friend Dani. It’s taco night in the Big Brother house, everyone is sitting down eating together when Memphis comes in and tells them all to gather in the living room. Time for the Have Nots to pass off to another member of the house for the next week. Da’Vonne passes hers off to Christmas, David to Cody. Christmas is upset, Da’Vonne said all week that she would pass it to Kevin, then she passes it to her.