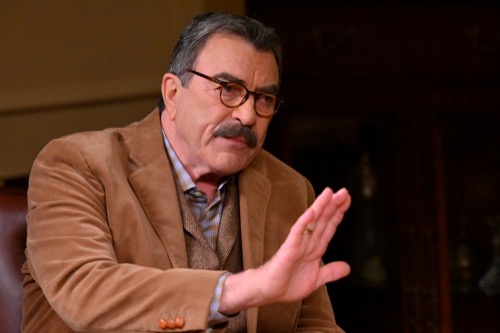 Tonight on CBS their hit drama starring Tom Selleck Blue Bloods airs an all-new Friday, April 3, 2020, episode and we have your Blue Bloods recap below. On tonight’s Blue Bloods Season 10 episode 18 “Hide In Plain Sight,” as per the CBS synopsis, “Baez and Danny track down a drug dealer after two young models died from an overdose. Jamie and Eddie determine who the mastermind is behind a robbery.”

Erin is on the scene of a fire, it appears to be arson. Anthony introduces the landlord to Erin, he saves the family of four inside. Anthony tells him that he would like to bring him back to the precinct to ask him questions. Anthony gets a message, the grandfather just died from his injuries, it is now murder.

Jamie gets called to a crime scene at an electronics store.

Danny and Maria are told two women enter the ER and at first, their cases didn’t seem to be connected until they found high doses of amphetamines in their system. Their names are Audrea Leone and Lea Rooming, well-known models. One of the patients said before she lost consciousness, they were poisoned.

Father Quinn is with Frank, he asks him to look into something for him. It is regarding another priest who is being accused of having a relationship with an eleven-year-old boy, Sebastien.

Samson James, a designer and Jules Serina, their den mother, is trying to get into the women’s room at the hospital. Danny is there and Maria, she tells Samson that Lea died that morning. The two are shocked to find out that one of the girls is dead.

Jamie and Eddie are on the scene of the crime, they speak to a witness and she says that she saw a group of kids run out of the store; they looked like disadvantaged kids.

Frank is reading a file, he calls in Sid and tells him he wants him to look into it. Sid says he is uncomfortable looking it this, he is a catholic, can he ask an atheist. Frank says they are looking into the truth. Frank tells Sid this stays between them.

Wilson is working with Erin and she knocks heads with her and throws her off the case for speaking to reporters.

Danny and Maria go to see Mr. James, a couple of hours before the two girls overdosed, he was seen leaving a night club arm in arm with them. Danny says he is obviously knowing more than he is telling them. Samson says he put them in a cab and sent them home.

Jamie and Eddie watch the video footage, their witness, Mia, was in the shop and it looks like she knew the perpetrators.

Erin asks Anthony who are the suspects for the fire, the landlord, and the contractor. Anthony says he thinks their white knight is the person who caused the fire.

Jamie and Eddie go to see Mia, she tells them that they don’t know what these kids have been through.

Wilson goes to see Anthony and tells her that she wants to get out of this mess with Erin, he tells her to apologize and grovel.

Next, Danny and Maria go to see Jules Serina, the den mother, to find out if she knows anything. She gives them a name, Scooter Smith, she has his contact info, he supplied the drugs.

Frank tells Father Quinn that his priest friend is innocent, but the eleven-year-old boy is most likely his son. Frank goes to see the priest, he meets with Angelique as well, who works in the church and he tells them that he knows about their son. Frank says he wants the whole story. The priest says he betrayed his vows for a short period a long time ago with Angelique. She takes all the blame.

Scooter Smith is in the precinct, Danny asks if there was a go-between. He says the girls didn’t buy the drugs, it was Jules Serina.

Jamie and Eddie are interviewing the boys who robbed the electronics store, Mia was the one who gave them the layout of the store and had the whole plan. Jamie tells them he will speak to the boys if they tell him everything.

Jamie is upset, Jules Serina is not answering her cell phone. They head to her place and her dog is barking to get in the door, they find her hung from her ceiling, she didn’t make it.

Erin and Anthony call in the landlord, Anthony says they found security footage of him entering the apartment. There was a nanny cam in the apartment, and they see him going into the apartment. The man tells the truth, he didn’t know they were going to be home and as soon as he realized it, he went in to save them.