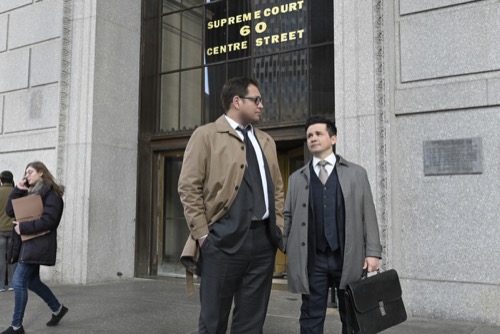 Tonight on CBS their drama Bull inspired by Dr. Phil McGraw airs with an all-new April 13, 2020, episode and we have your Bull recap below.  On tonight’s Bull season 4 episode 19 called, “The Sovereigns,” as per the CBS synopsis, “Bull mounts the defense of an idealistic state judge, Judge Duggan, who’s on trial for obstruction of justice after she helped a trial witness evade federal arrest in her courtroom.

During voir dire, Benny looks for jurors who believe the law is open to interpretation and that Judge Duggan broke the law to uphold courtrooms as sacred spaces within the justice system.”

An ADA made a critical mistake. She offered a witness immunity in exchange for her testimony against a doctor accused of assisted suicide and this ADA didn’t clear her deal with the feds. The FBI later showed up in court. They made their presence known and they were going to arrest this witness, but the judge stepped in. The judge didn’t want to see an innocent woman go to prison. Judge Madison Duggan helped the witness escape the courtroom and she was arrested because of it. The FBI was held personally responsible for Nurse Jansen’s escape. They were charging her with aiding a felon and she could be looking at twenty-five years to life.

Judge Duggan was in a lot of legal trouble. She needed help and so she turned to Bull. Bull agreed to take her case. He had his people look into her and she was a good judge. She was tough but fair. She made sure the punishment fit the crime. She also wasn’t a bad person. She was a good judge and she even had a social media following. Judge Duggan’s case has caught media attention because of her high profile. Everyone wanted to know why she did it and Bull had asked the same thing. He asked Duggan privately why she did it. She said she wanted to preserve the sanctity of the court and that she merely wanted to do the right thing.

Bull chose to believe her. He had his people look for legal loopholes and Benny later tried to get the case against Judge Duggan dismissed, but it didn’t work. The State Attorney wanted to make an example of her. They were coming for Judge Duggan with everything they had and the judge in her case wasn’t helping. He seemed to be against Duggan from the very beginning. It showed in small ways. The team was trying to put together the right jury for Judge Duggan’s case and they came across a woman who was unfit. Benny tried to get her dismissed and the judge overruled him. He didn’t care that this juror was potentially biased against Judge Duggan.

Duggan saw what was happening. She spoke up in her own defense. She acted without Bull’s guidance and she threatened to report the judge to the Board of Judicial Review. She was so angry that she kept talking long after she had been warned and so the judge had her held in contempt. She was arrested. She was thrown in jail and Bull later had to bail her out. Bull also had a few words for her. He told her that she risked her case with that stunt of hers and that she ruined their defense. Their defense was to claim Judge Duggan was respecting the sanctity of the court. It was now hard to prove that because she crapped all over the court when she threatened the judge.

By the time they returned to court, they were faced with a sea of red. The jury was lost to them and there didn’t seem like there was anything Bull or his team could do to fix it. Benny tried his best. He tried to claim that the federal agents violated the courtroom that day when they showed and his plan was working when the State Attorney pulled out Nurse Jansen. Jansen had made another deal with the prosecution. She agreed to testify against the judge and she lied in open court. She claimed the judge told her to flee because she wanted to stick it to the feds. Jansen even made up some story about Judge Duggan calling the feds “feebs”.

Judge Duggan told Bull she would never say that. He chose to believe her and so he and Benny put her on the stand. Judge Duggan gave a compelling testimony. She convinced several jurors that she wasn’t a bad person and so the prosecutor came up with her agent. Judge Duggan had met with an agent. This agent wanted to put her on television and he claimed that Duggan wanted fame. Only Duggan never signed anything with him. She only met with him twice and she had no interest in becoming a reality star. Duggan told Benny and Bull and the men went after the agent on the stand. Benny pushed the agent into admitting that Duggan would be a bigger star if she lost her case.

The agent didn’t care about her. He hoped after pushing her into a corner that she would do anything for him and so Benny showed that in court. Benny defended Judge Duggan to the best of his abilities but the jury still found her guilty. They found her guilty and they wanted to put her away. Benny and Bull came up with one last plan. They decided to put together one last compelling witness who opened the judge’s eyes and this person convinced the judge in the case to set aside the guilty charge. He decided to use his authority to find Judge Duggan innocent and now she gets to be free.

She still has to appear in front of a review board. But for now, she’s free and she could do whatever she likes.