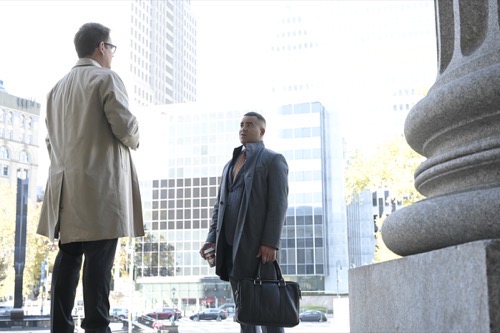 Tonight on CBS their drama Bull inspired by Dr. Phil McGraw airs with an all-new November 23, 2020, episode and we have your Bull recap below.  On tonight’s Bull season 5 episode 2 called, “The Great Divide,” as per the CBS synopsis, “The TAC team experiences a conflict of interest in court when Benny represents the plaintiff and Chunk represents the defendant in the same civil suit, where a mother sues a young artist she deems responsible for her daughter’s death.”

There was an accident. There were a group of people staying in a building where they weren’t paying rent and one day a beam came down. This beam killed two people. It killed a young couple in bed together and there was nothing the police or the District Attorney’s office could do about it because this group was known as squatters. These squatters didn’t have any rights with this building. The building was built in the 1870s. It was a cigar factory before it became a sweatshop and an import/export business. Then five years ago the city told the owner that he had to bring the building up to code else he wouldn’t be allowed to profit from it by leasing it and the owner said no.

The owner didn’t want to waste the money. He abandoned the building and he went overseas. This building was therefore deserted when the squatters moved in. The squatters were the ones who took over the building. They were a group of college dropouts who dreamed of being artists and most weren’t in contact with their family. If they had been, they wouldn’t be homeless. This is when one of them found out about a deserted building and she told her friend. The group moved in together because there was no one stopping them. They thought they could live rent-free in the city and that there wouldn’t be consequences.

It never even occurred to them that living in an abandoned building might be dangerous. This little tidbit didn’t dawn on them until two of their own were killed in bed and now the group was dealing with repercussions. The young couple that died had parents. The young woman’s mother is a wealthy millionaire who wants to blame someone for her daughter’s death and she’s choosing to blame Lily Knowles. She was the one that found out about the building. She was the one who told her friends about it and so Evelyn Waters blames her for Claire’s death. Claire wasn’t in contact with her mother around her time of death because Evelyn cut her off.

Evelyn didn’t like that her daughter dropped out of college to become an artist. She told her daughter that either she returned to school or else she’ll be cut off and Claire chose to make do without her money. Claire was living in an abandoned building with her friends in Chinatown because she didn’t want to return to her upper-class home where her mother was. This means that only Claire is responsible for why she was in that abandoned building. She was also responsible for her own death and so Chunk agreed to represent Lily in the lawsuit that Evelyn brought against her. Evelyn was looking for someone else to blame. She chose Lily and now she’s suing Lily.

Evelyn is suing Lily for her daughter’s wrongful death. Lily doesn’t have any money. She was homeless and she also wasn’t the only one there. It was a group of them. They all chose to live in that building together and so Evelyn picking on Lily was cruel. Chunk chose to represent Lily because he thought the wrongful death suit might lead to some very real charges. He wanted to prevent that and so he agreed to represent Lily. Only Chunk didn’t know that Benny had agreed to represent Evelyn. Both Chunk and Benny were working for the same law firm and so they couldn’t represent opposing sides.

Both men brought it to Bull. Bull had to decide which case they were going to work on and he chose Lily’s side. Benny was told to drop Evelyn. He tried to do just that when she found a reason to dislike her new council and she begged Benny to come back. Benny felt sorry for Evelyn. He thought the loss of her child should come with repercussions and he also thought Lily held some fault. Lily was the first to break the law. She found the building and she was the first to move in. Lily then encouraged her friends to break the law as well. Benny thinks she’s responsible for what happened to Claire and Claire’s boyfriend Finn Danford. They wouldn’t be dead now if it hadn’t been for Lily.

Benny wanted to take this case. He didn’t want to give it up and so Bull had to come up with a compromise. He chose to split the law firm. Benny would get Danny and Marissa on his team while Chunk would get Bull and Taylor. One half of the law firm used the boardroom and the other half used Bull’s office. The two sides wouldn’t talk to each other about the case. They wouldn’t share any information nor did any side gain access to their special screen that monitors the jurors. Things were going to be fair for both sides. Bull and Taylor were a great team even without the screen and they helped sure up Chunk.

Chunk just graduated from Law School. He needed all the trial experience he could get and so he should have leaned on Bull, but sometimes Chunk got carried away and so he made a critical mistake with their first witness. The first witness used to live at this commune. This is what the group called the building. They called it an artist cooperative where they were all free to express themselves and the witness recalled mentioning to Lily that one of the beams looked like it was leaning. He told her because she was the one in charge. The witness felt it was so unsafe that he found another place to stay and he thought the others should. He didn’t warn the others. He thought Lily will tell them.

Only Chunk brought in his own witness. He brought in Finn’s mother who hadn’t joined Evelyn’s lawsuit because she didn’t blame Lily for her son’s death. She thought it was the city’s fault for not providing low-income housing and she knows blaming Lily won’t bring her son back. Lily is a kid to her. She’s the same age as Finn was and so his mother didn’t want to ruin Lily’s life. Finn’s mother’s testimony had done wonders for Lily’s case however Benny found some text messages that she had sent Claire and Fin. It turns out Lily had offered them her old spot under the beam because she wanted to give them some privacy and unfortunately Benny made it seem like Lily deliberately put them in harm’s way.

He grilled Lily on the stand. He confirmed that she had given them the spot after she had been warned about it and she claimed she was just being nice. Either way, it took the jury three days to determine that Lily was liable for the death of Claire Water. They also said that Lily only had to pay Evelyn a dollar. This wasn’t what Evelyn had planned. She wanted to punish Lily and draw blood if she had to. And so it’s a good thing the jury reached their own compromise.

The jury was deadlocked until they came up with this agreement that allowed both sides to win and lose.

Benny did so well on the case that the powers that be asked him if he was willing to be the next District Attorney. He would have to run after the current DA stepped down because of a scandal and so it’s not like Benny was being handed this position. But many believe he would win if he ran.