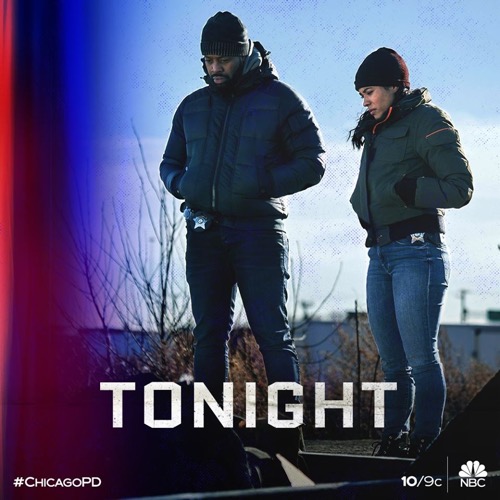 Tonight on NBC their drama Chicago PD returns with an all-new Wednesday, February 12, 2020, season 7 episode 14 called, “Center Mass,” and we have your Chicago PD recap below. On tonight’s Chicago PD season 7 episode 14 as per the NBC synopsis, “A homeless man’s murder leads Intelligence to a criminal who has evaded capture for years. Rojas has a troubling experience with a young mentally ill man.”

An old friend asked Rojas for a favor. Rojas was in foster care as a child and she grew to be really close with her caseworker. Ben was one of the good guys. He looks out for the people he works with and he was currently looking for someone named Roberto Albert Pena. Pena used to live on the streets. He had Ben find him a place to live and he had a job lined up for him as well. Only Pena never made it to the job interview. Hos failure to make it had alerted Ben and so Ben asked Rojas for her help in finding Pena.

Ben just wanted to know that Pena was alright. He never expected that Rojas or the police would reach him to him after they found Pena dead and yet that’s how he was found. Pena was murdered and then left in a dumpster. Rojas wanted to work the murder and so she brought it to Intelligence. This normally wasn’t the type of case they would work. Voight ended up making an exception for her and so Rojas suddenly had resources to find Pena’s murder. The team was looking for Pena’s murderer.

They knew that Pena had lost his apartment so it made no sense to check there. They therefore checked the homeless settlements until they found someone that recognized Pena and one person stuck out to them. It was some kid named Sammy. Sammy believed the CIA was spying all of them and that the government was out to get him. Sammy also gave free legal advice in return for food. He went to law school for two years and so he was the closest to a free attorney that people on the street were ever going to get.

The detectives went to back to his tent. They didn’t find Sammy and they did find sneakers that had blood on the soles there. It was the blood that convinced Intelligence that Sammy was their guy. They went looking for him and they found someone who had been trying to help him. Sammy’s full name is Samuel Logan. He’s a paranoid schizophrenic. He thinks the government is trying to control him and so he refuses to take his medication. Sammy was later found and he tried to run from them because he thought the detectives were from the government.

Sammy ran from them. He ran onto a bus and he pulled out a knife. He thankfully didn’t use it and he gave himself up before long. Most people don’t know it, but paranoid schizophrenics are usually meek. They would rather hide than fight and Sammy gave himself up fairly fast. Rojas didn’t think he did it. She later worked to gain his trust and she convinced him that’s he wasn’t a spook. He needed believe she wasn’t with the government. And after she had gained his trust, Sammy told her what happened.

Sammy told her about a guy that comes around pretending to be a caseworker. He said the guy came by the house where Pena was staying and that he was in the bathroom when he heard a fight. Sammy claims to have watched the fight from a hole in the door. He said he saw the pretender kill Pena and that he ran out after he thought it was clear. Sammy wasn’t sure if this other guy saw him or not. He thought he did. He also thought this other man was looking for him and so that could either be the disease or what really happened.

The detectives weren’t sure to believe him at first. It took someone cashing in a check in Pena’s name to alert them about this other man and so apparently Sammy was telling the truth. The detectives even identified the other guy. His name is Eduardo Salazar and he’s wanted by the FBI for killing a cop. He was robbing banks when the cop got in the way and so that’s why he called him. He’s just hasn’t been seen since. Salazar looked a lot like Pena and he killed Pena because he wanted to take over his identity.

The FBI have been wondering how Salazar was able to stay under the radar. He must have been targeting the homeless and he would pick people that didn’t have family looking for them. The detectives later found Salazar by finding his girlfriend first. She didn’t get the chance to warn him that they were made and so the detectives picked him up on his way “home”. They found him right after he got his passport photo done. It seems Salazar was going to leave the country as Pena with his girlfriend. And so Intelligence got him at the perfect time.

What wasn’t perfect is that their only witness disappeared. Sammy escaped from the hospital they put him in and he hasn’t been taking his medication. Rojas and Upton looked for him at the settlement. They then found out he had turned on his cell phone. They used that to track him to a closed library and unfortunately he pulled a gun on them. Sammy didn’t remember Rojas from before. He freaked out and ran. He ran to a local corner store. He spotted a bald latino and he thought he was Salazar. And so he raised his hand and Rojas shot him.

Rojas thought he was going for his gun, but it turns out Sammy dropped his gun in the run to the store and so he was raising his cell phone.

The detectives later recovered a gun almost miraculously and so Voight made sure a gun was found so that Rojas didn’t get into trouble.

And Sammy survived his ordeal and he was at a hospital where hopefully he’ll accept treatment.

Voight also spoke to Burgess following her miscarriage and he told her that there wasn’t a rush for her to return to work. She can return whenever she’s ready.