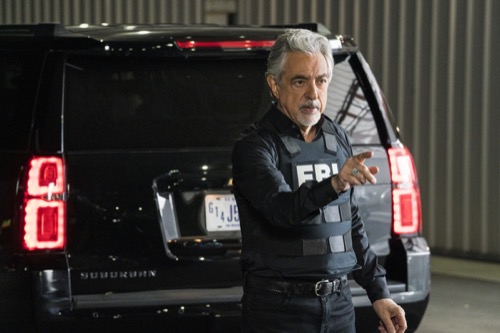 Tonight on CBS their hit drama Criminal Minds returns with an all-new Thursday, February 19, 2020, season 15  episode 10 series finale, called “And In The End,” and we have your weekly Criminal Minds recap below. In tonight’s Criminal Minds episode season 15 episode 10 as per the CBS synopsis, “Series finale. Following an explosive encounter with Everett Lynch Dr. Reid suffers a brain injury and, while experiencing hallucinations, is visited by ghosts from his past.

Also, the BAU makes a shocking discovery about Lynch that affects Rossi personally, and the entire BAU team comes together to celebrate Rossi’s retirement.”

Reid came to the conclusion mere moments before passing out. He had been close to the explosion and had suffered a head wound. Its that same head wound that was acting up now. Reid passed out and he hallucinated as his brain struggled to maintain itself. He saw people he hadn’t seen in years. He saw his former co-workers and friends. He also met several people that were died. Reid questioned if he too was dying. He spoke with a serial killer. He and George Foyet talked about their joint past together.

They were saying their goodbyes as the rest of the team was now dealing with life without Everett Lynch. The man was assumed dead by the rest of the team and so they moved on. Rossi talked about retiring. He’s reached the age when he can no longer pursue criminals like he used to and so he was ready to say goodbye to the team. He also wasn’t the only viewing an exit. Garcia received a job offer that was too hard to pass up and that meant she could be heading to Silicon Valley. Then there was JJ.

JJ was offered a job in New Orleans. It would bring her husband closer to his family and it would give her better opportunities. JJ had considered passing on the offer because she was offered something better. She was told by Prentiss that there needed to be a new head of the BAU. Prentiss considered the job of becoming the new Director of the FBI and so she had wanted JJ to fill in her boots. But the job offer was rescinded. Prentiss was told she wasn’t in the running to be the Director anymore and unfortunately that affected JJ as well.

The team was later brought together. They were missing Reid and they thought he had slept in. They had wanted to go over the case and it was as they were doing so that they realized Everett Lynch was alive. They went after him and odds are he’ll want to come after them. Everett was going to plan an attack on their home turfs. They had to be prepared for it and so JJ went to go see Reid. She wanted to warn him. She never thought she would find him passed out on the floor and he was even having seizures.

Reid was rushed to the hospital. JJ had wanted to stay with him. Garcia persuaded her to join up with the rest of the team because they were going to need JJ more. They needed everyone available to track down Everett and so JJ joined the others. They couldn’t afford to let Reid’s medical condition stop them from finding a serial killer. They knew he would target their families and so they secured bodyguards for everyone. They thought that would keep their families safe. They had no idea that Everett would kill a guard and manipulate his way into Rossi’s home.

Everett held Rossi’s wife captive. Krystal was forced out of her home and told to drive a car. She was driving when Rossi checked in. Krystal apologized to him. She said she saw the badge and opened the door. She was just finishing saying she was sorry when Everett spoke. Everett wrote Rossi into his end game and he wanted the man to know it. He toyed with Rossi. He then demanded a plane and the team tried to stop him from boarding. They told him they didn’t have a captain. He told them that he was a captain. He said how older women love pilots and so he tried to get on the plane with Krystal.

Rossi stopped him. Rossi demanded that Everett take him prisoner instead of Krystal and so they did an exchange. Krystal was released. Rossi became a hostage and they boarded the team’s private jet. The rest of the team thought that was going to be the end. Prentiss knew better. Prentiss knew that Rossi and Gideon had hidden weapons on the plane and so she waited for Rossi to fight back. He got himself out of his cuffs. He snuck up behind Everett with a weapon and he tried to kill him. Everett returned fire.

Rossi was injured. So, Rossi got off the plane. He went to his team and that freed their hands. They then started to shoot at the plane. They punctured the fuel tank and so JJ used that to light a fuse. She shot a flare gun. It ignited the fuel and the whole plane blew up. It killed Everett and this time there was no coming back for him. He truly is dead! The team was now free to put this whole sordid tale behind them and so that’s what they did. They even welcomed Reid back after he was released from the hospital.

They all came together at Rossi’s place. Rossi threw another glamorous party and this time they all got to say goodbye to Garcia. It turns out she was leaving first. She accepted a job with a nonprofit in the area and so she’ll still be nearby. And that’s a good thing because Alvez asked her out to dinner.

Garcia also said another round of goodbyes at the office. The team was working on a new case and this time she wasn’t involved.