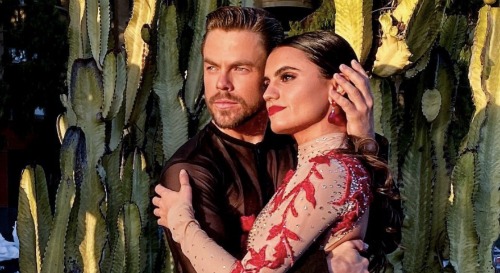 Dancing With the Stars spoilers reveal that alum and new judge Derek Hough will be dancing with his girlfriend this week. While the official Instagram account for the show promoted the big event, several fans are trying to make the hashtag #HayleyForPro go viral with one wish. They want Hayley Erbert to be added as a professional dancer next season.

DWTS spoilers reveal that both Derek and Hayley have history with the show. Derek is a well-known alum and was brought back as a judge this season. It was an exciting change, especially with the controversial decision to replace co-hosts Tom Bergeron and Erin Andrews with Tyra Banks.

Previously, Derek talked about how excited and grateful he was for the opportunity to come back to the show in a different capacity.

However, Derek isn’t just sitting in the judge’s seat. This week, we will see him dancing with his real life girlfriend, Hayley. It is a highly anticipated event and for those that are new to the show or have forgotten, Hayley was a mentor on Dancing With the Stars: Juniors and part of the troupe in DWTS for three-and-a-half years.

Dancing With the Stars spoilers reveal that some fans are trying to make the hashtag #HayleyForPro go viral. They really want Hayley to be added next season as a pro dancer. Not only are there individual posts with the hashtag, but several viewers are busy filling up comments throughout Instagram with the hashtag.

Dancing With the Stars Spoilers: Could It Really Happen?

It absolutely could happen and there is that saying, ‘never say never.” It seems that when Hayley found out the entire troupe was not going to be brought back, she was disappointed. It also seems that Hayley and DWTS ended things on good terms (as far as we know).

So, this definitely could be a possibility, but we will just have to wait and see if it actually happens or not.

Would you like to see Hayley Erbert join DWTS next season as a pro or not? Tell us what you think and what you would like to see happen in the future. In the meantime, remember to come back to CDL for sizzling Dancing With the Stars spoilers, updates and news.