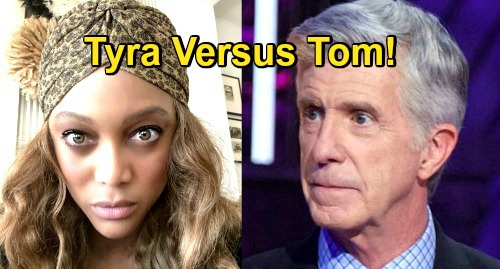 Dancing With the Stars spoilers reveal that there are a lot of strong, passionate opinions about Tyra Banks taking over the show. Some viewers think that the newcomer should be given a chance.

However, most are pretty vocal about wanting Tom Bergeron back since he was replaced by Tyra Banks. So, what does judge Derek Hough think? He gets honest about how feels about both and their hosting styles.

DWTS spoilers reveal that when the news came out that Tom Bergeron and Erin Andrews were not coming back, fans were outraged. They have been co-hosts for a very long time.

With a legendary show like DWTS, viewers get used to it being run and done a certain way. As a general rule, people are resistant to change. It sparks fear, especially when you consider how different his replacement is.

Fans feel so passionately about this, especially Tom, that one person actually offered him money to come back.

Now, some people were willing to give Tyra a chance to prove herself, even after reports that she was making big changes. However, as time has gone on, viewers are losing patience.

The big changes aren’t as much as an issue as the way Tyra conducts herself when hosting. Constant wardrobe changes, the dance floor turning into a fashion show, not letting judges speak and every mistake is being put under a microscope.

Derek Hough Gets Honest About Both Hosts

Dancing With the Spoilers reveal that some judges are starting to come forward with their opinion about Tyra as a host compared to Tom. Derek Hough is one of them and he shared what he really thinks with Fox News.

Derek said that Tom and Tyra have completely different styles and they are so different. He elaborated that you really can’t compare the two. With that being said, he had nothing negative to say about Tyra’s way of doing things.

Dancing With the Stars Spoilers: Ratings and Expectations

What do you think of Tyra Banks hosting DWTS as compared to how Tom Bergeron did things? Which do you prefer and why? Come right back here to CDL for juicy Dancing With the Stars spoilers, updates and news.