Days of Our Lives Spoilers: Ben and Ciara Married With a Baby in #Cin Fairy Tale – DOOL Supercouple Get Happily Ever After 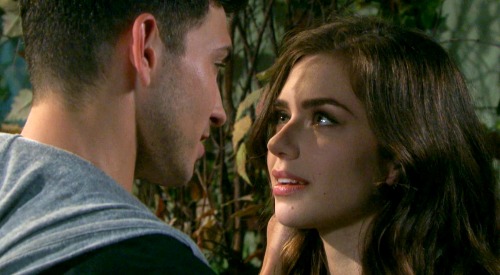 Days of Our Lives spoilers reveal Ciara Brady (Victoria Konefal) hasn’t been able to clear Ben Weston’s (Robert Scott Wilson) name. However, she did succeed in getting the case reopened. After the truth comes out and Ben can walk out of prison a free man, will “Cin” get married and have babies? We certainly think so, and we expect them to be a DOOL supercouple.

DOOL spoilers reveal that we have watched the evolution of Ben and Ciara as a couple. When the possibility of the two characters getting together was first hinted, it seemed impossible. He was a serial killer who had been released from Bayview. Ciara was the daughter of Hope Brady (Kristian Alfonso), Salem detective and the on-and-off again police commissioner. What could these two have in common?

It was previously teased that what bonds Ben and Ciara is the fact that they are two broken souls who have found their way to each other. Despite everyone in Salem trying to drive them apart, Ben was finally redeemed. However, once their relationship was “accepted,” Ben and Ciara would face more obstacles that threatened to separate them forever.

Of course, we are talking about the death penalty. But they will get through this, just like they have gotten through so many issues before.

Days of Our Lives spoilers suggest that after Ben is finally cleared and released from prison, it will be time for “Cin” to resume their lives together. We fully expect there to be a marriage proposal within the next year. We also predict they will end up having babies soon after that!

It is obvious that they are meant to be together and they are quickly becoming a fan-favorite iconic couple, which brings us to our next point.

Days of Our Lives Spoilers: The New Bo and Hope?

This is a controversial statement, we understand that. After all, very few couples can sit among the ranks of Bo Brady (formerly Peter Reckell) and Hope. However, we see a strong future with “Cin.” After everything they have been through the past few years, they still haven’t given up on one another.

While they might not exactly be “the new Bo and Hope,” they are a powerful soap supercouple in their own right. It is a “Cin”-fully delicious love story of the ages. Be sure to catch up on everything happening with DOOL right now on NBC. Come to CDL often for Days of Our Lives spoilers and news!