Days of Our Lives Spoilers: Ben Hauled Back To Prison – Execution Process Begins, Will Ciara Save The Day? 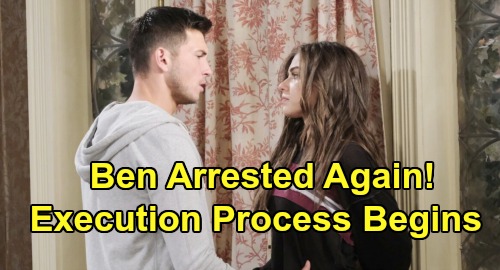 Days of Our Lives (DOOL) spoilers tease that things are going to come down to the wire for Ben Weston (Robert Scott Wilson) and Ciara Brady (Victoria Konefal). As DOOL viewers know, Ben is currently a prison escapee, and Ciara is harboring him as a fugitive. They’re in some pretty big trouble, but they feel that they really had no choice in the matter.

Ben needed to escape from Statesville or face his execution coming up in short order. Well, since Ben’s dramatic escape from prison and his meetup with Ciara at the meeting point, the two have been hiding out in the gatehouse on the DiMera property.

They know that they can’t stay there forever, and while they’re trying to formulate a plan, they’ll get caught on the property by Chad DiMera (Billy Flynn). It looks like they’ll have some scary moments as Chad nearly turns them in, but Ciara will ultimately convince Chad not to do it.

But that will be just a short-lived reprieve for Ben and Ciara, as Rafe Hernandez (Galen Gering) will soon come knocking on their door. Perhaps thinking that it’s Chad, they’ll open the door to find Rafe standing there, who will promptly try to arrest Ben.

However, Ciara will decide to take matters in her own hands, and she’ll wallop Rafe over the head with a baseball bat to prevent the arrest.

Well, after that dramatic move, Ben and Ciara will be in real trouble. They obviously won’t be able to stay at the gatehouse any longer, so they’ll probably be on the move.

But unfortunately for them, it seems that their time on the move will be relatively short-lived. According to Days of Our Lives spoilers, Ben will eventually be apprehended and hauled back to Statesville.

That’s going to leave Ciara completely distraught, given that Ben’s execution is quickly approaching. Really, the only thing she’ll be able to do for Ben at this point is to continue to investigate who really killed Jordan Ridgeway (Chrishell Stause), and DOOL spoilers indicate that she’ll have a new theory about that soon,

Ciara will need to work quickly on her theory, though, as Ben’s time will be ticking away quickly. It looks like things will get right down to the wire, as Ben will even get to the point of saying goodbye to his dad Clyde Weston (James Read) at the prison. Ciara had better work fast if she wants to save Ben from certain death!

In fact, we could be building up to a dramatic scene, where Ciara finds out the truth about Jordan’s murderer and Justin Kiriakis (Wally Kurth) tells the authorities at the last second about who they believe actually committed the crime. Do you think we’ll see Ben get a last-minute reprieve? Stick with DOOL and be sure to keep reading CDL for the latest Days of Our Lives spoilers, news, and updates.