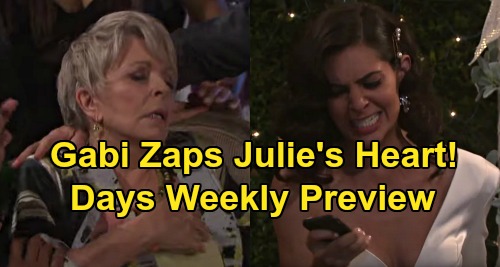 Days of Our Lives (DOOL) spoilers tease that there’s a lot going down on the NBC soap during the week of February 17-21. In fact, there’s so much action that NBC put out a second DOOL promo for the week and it covers two major storylines that will absolutely explode in the coming days. Let’s get right into the action!

First, off, the promo addresses the tricky situation that Ciara Brady (Victoria Konefal) and Ben Weston (Robert Scott Wilson) are in. As DOOL viewers know, Ben is a fugitive from the law, and Ciara conspired with Clyde Weston (James Read) to help him escape from Statesville.

Inexplicably, instead of fleeing Salem, the two are hiding out in the DiMera gatehouse, where they used to live.

According to DOOL spoilers, they’ll soon be discovered by Chad DiMera (Billy Flynn), but Ciara will make a big plea to Chad and he’ll agree to stay quiet about having the pair hiding out in the gatehouse.

But Ciara and Ben won’t be so lucky when they next open the door and find Rafe Hernandez (Galen Gering) standing there!

Of course, Rafe’s a cop and he’ll have strict orders to apprehend Ben. The promo shows Rafe telling Ben and Ciara “game over,” and cuffing Ben while reading him his Miranda rights.

But then, Ciara picks up a baseball bat and bashes Rafe over the head with the bat! It looks like that will temporarily get them out of their jam, but it will just be a quick fix.

Ongoing Days of Our Lives spoilers indicate that Ben will be eventually apprehended again, and he’ll be hauled off back to Statesville to await his execution. That will mean that Ciara will need to find Jordan Ridgeway’s (Chrishell Stause) in short order, or else Ben will soon be history!

Next, the DOOL promo addresses Gabi Hernandez (Camila Banus) and Eli Grant’s (Lamon Archey) wedding disaster. As DOOL viewers know, Lani has interrupted the wedding, and the promo shows what will happen next.

Lani is shown walking toward the altar and addressing Julie Williams (Susan Seaforth Hayes), who is officiating the ceremony.

Lani tells Julie, “Gabi has an app on her phone that can manipulate your heart.” Gabi looks absolutely livid in response to that, and she takes her phone and vigorously pushes the button on her app.

Suddenly, Julie gasps and collapses in Abigail DiMera’s (Kate Mansi) arms while everyone rushes to Julie’s aid. Well, according to DOOL spoilers, the whole thing will be a setup, and Julie’s collapse will be a big ploy that was coordinated in advance to frame Gabi.

Unfortunately for Gabi, that will mean that she attempted to assault Julie with deadly force in front of a bunch of witnesses, and she’s going to be in a load of legal trouble going forward.

Soon, she’ll be placed under arrest by Rafe and her problems will just be beginning. And the really good news here is that ongoing DOOL spoilers say that Lani and Eli will eventually have it out, with a big reunion forthcoming. It looks like it will take Eli a little time to process everything that’s happened, but he’ll get there!

You can watch the new DOOL promo below. It looks like we’re in for a big week on the NBC soap! Days of Our Lives fans can stick with CDL for all the latest in DOOL news, updates, and spoilers.