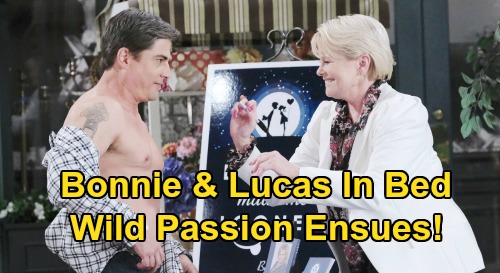 Days of Our Lives (DOOL) spoilers tease that Bonnie Lockhart (Judi Evans) has seemed to have one thing on her mind ever since she returned to Salem – Lucas Horton (Bryan Dattilo). As DOOL viewers know, Bonnie and Lucas have a pretty bad history, with Bonnie impersonating Adrienne Kiriakis (Judi Evans) for a while and actually sleeping with Lucas during her ruse.

And then Bonnie returned to the Salem scene and had Lucas convinced that they had conceived a child together – Baby Bonnie – when she was posing as Adrienne.

Lucas went so far as to fight Bonnie for custody of Baby Bonnie, only to find out later that Baby Bonnie was actually named Emily Lockhart and was Mimi Lockhart (Farah Fath) and Rex Brady’s (Kyle Lowder) baby. It was a real mess, and it’s not something that Lucas is going to forget anytime soon.

But Lucas tends to go through vulnerable periods, and he now seems to be one of them. Lucas’ daughter Allie Horton (Lindsay Arnold) is pregnant and determined to give her baby up for adoption, and that’s got Lucas in a tizzy.

He can’t seem to talk with Allie without making a mess of things, and now things have really escalated for Lucas since Sami Brady (Alison Sweeney) is back in Salem and is essentially taking a wrecking ball to their family.

Interestingly, in recent episodes, Bonnie has tried to befriend Lucas on the grounds that she can help him with his problems with Allie.

Bonnie listened, then opined that Lucas really knew what was best for Allie – something that was music to Lucas’ ears, since literally everyone else in Salem has been telling him that he’s coming on too strong with Allie.

Of course, Bonnie was hoping that her help would cause Lucas to just magically fall into her arms, which didn’t happen.

Instead, Lucas decided to try to track down Sami, and while this wasn’t the outcome that Bonnie wanted, DOOL spoilers say that Bonnie’s not going to give up going forward.

Bonnie seems hell bent on making Lucas hers, and it looks like her efforts to make things up to him are going to continue. And one would like to think that Bonnie would do something a bit more constructive to make things up to Lucas than write him a lewd inscription in a copy of her book!

Well, according to Days of Our Lives spoilers, Bonnie will take her pursuit of Lucas to a whole new level.

Lucas appears to be staying at the DiMera mansion with his mom Kate DiMera (Lauren Koslow), and it seems that Bonnie might take the opportunity to sneak into his room in the mansion, as she’ll end up surprising Lucas in bed! Something tells us that this will be a total shocker for Lucas.

Perhaps Lucas will wake up one morning to find Bonnie by his side!

Now, Lucas will probably have a big reaction to that which will probably include ordering Bonnie out, but we have to wonder whether there could actually be something between Lucas and Bonnie going forward.

It’s always possible that Bonnie will wear Lucas down and in a moment of wanting to escape all the drama around him, he’ll actually sleep with Bonnie. We’ll see what happens here, but it seems like something’s brewing between these two.

Would you like to see Bonnie and Lucas get together for real? Stay tuned to the NBC soap and be sure to keep CDL as your go-to source for all the latest Days of Our Lives news and spoilers. And be sure to check out our daily DOOL recaps as well!