BY hellodrdavis on March 22, 2020 | Comments: one comment
Related : Days of Our Lives, Soap Opera, Spoiler, Television 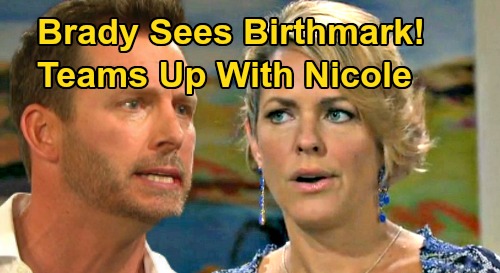 Days of Our Lives (DOOL) spoilers tease that Brady Black (Eric Martsolf) will be in for a surprise. As DOOL viewers know, he’s currently unaware of Nicole Walker’s (Arianne Zucker) suspicions about baby Mackenzie (Mikey) Horton’s true identify. Based on her observation of the birthmark on Mackenzie, Nicole thinks that Mickey is actually the biological daughter of Brady and Kristen DiMera (Stacy Haiduk). But she’s far from proving it yet.

Nicole has gone so far as to pick a brawl with Kristen, so that she could score a hair sample for a on-the-sly DNA test at the hospital. Nicole also swabbed Mackenzie’s cheek for a sample.

Unfortunately, DOOL spoilers say that the test, which Nicole will have run, will come back showing that Kristen and Mickey are NOT mother and daughter. Nicole won’t believe it, though, and she’ll suspect that Xander Kiriakis (Paul Telfer) was behind the negative result.

At any rate, all of this means that it’s going to take some time for Nicole to ultimately find evidence proving that Mackenzie is actually Brady and Kristen’s baby.

Days of Our Lives spoilers indicate that Nicole will lead Xander to believe that she’s dropped the matter, but she’ll take her theory and suspicions to Abe Carver (James Reynolds) and fill him in on the matter.

But while all of this is going on, something else is going to happen that could blow apart Nicole’s plan to handle this matter delicately. According to DOOL spoilers, Brady will notice the heart-shaped birthmark on Mickey’s neck.

This will be a significant development, since Brady knows for sure that his own daughter Rachel Black, who allegedly died shortly after birth, had that same birthmark.

It’s pretty hard to imagine Brady just seeing the birthmark and thinking it’s all a big coincidence and brushing the matter off. Will Brady say something right away, causing a major scene right then and there? Brady’s pretty impulsive, so he just might spout off to whoever might be standing by.

Or will Brady wait, thinking that he doesn’t want to cause Kristen pain and anguish in the event that it is all a big coincidence? Perhaps Brady and Nicole will team up from there to find out the real truth about Mackenzie and prove she’s really baby Rachel. But of course in the end there are going to be two devastated people – Eric Brady (Greg Vaughan) and Sarah Horton (Linsey Godfrey).

Still, the truth has got to come out, and Brady will know it. We’ll see what happens here, but it’s entirely possible that Brady will realize that Mickey is really his daughter before Nicole has a chance to tell Eric her suspicions about the matter.

And if that happens, Nicole will be in a terrible position, and it could threaten her relationship with Eric – goodness knows they’ve had enough secrets between them in the past and don’t need another!

Do you think that Brady will be the person to bust the secret about Mickey wide open? Stay tuned to the NBC soap and remember to check back with CDL often. We’ll keep you up to date on all the latest spoilers and news from Days of Our Lives.