Days of Our Lives Spoilers: Ciara Saves Sonny’s Life, Wrestles Evan’s Gun Away – Bursts in with Will to Stop Deadly Showdown 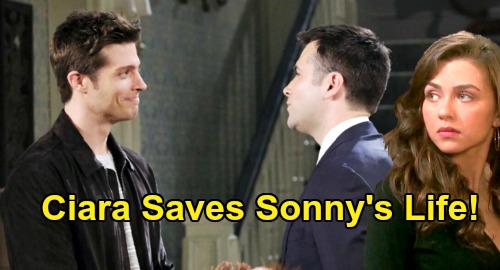 Days of Our Lives (DOOL) spoilers tease that Sonny Kiriakis (Freddie Smith) will find himself in an incredibly dangerous situation. Once Evan Frears (Brock Kelly) is backed into a corner, this character will take a disturbing turn.

Evan will prove Jordan Ridgeway (Chrishell Stause) was right to want him as far away from David as possible. He’ll be a madman with a gun during the week of March 2-6!

Sonny will be terrified as Evan aims his weapon, but Evan will think they can still fix this. He’ll admit he’s David Ridgeway’s (Caleb and Kyler Ends) father and has been keeping some dark secrets. However, Evan will have hope for a fresh start with Sonny. He’ll pressure Sonny to cave in as he holds him at gunpoint, so this will definitely be a tense situation.

These DOOL storylines will collide since Ciara suspects David’s father is Jordan’s killer. It won’t be long until Ciara figures out that man is Evan.

Days spoilers state that Will and Ciara will burst in on this showdown. They’ll see that Evan’s got a gun, which could spell serious trouble if he fires it. Ciara will leap into hero mode and go for the weapon. She’ll manage to get her hands on it and wrestle it away from Evan, so this should bring some exciting scenes.

Once Ciara’s in control of the situation, Days of Our Lives spoilers say Evan will be forced to surrender. Ciara would certainly be willing to shoot Evan if need be. He’ll realize the jig is up, so he’ll accept that Ciara’s running the show now.

Days spoilers, updates and news say Ciara will have an intriguing plan in mind – one that could save Ben from a grim fate. The only problem is time will be running out! Ciara will have to work fast if she wants to save her love, but we have total confidence in her. Ben won’t end up in the grave, so “Cin” fans can just buckle up and enjoy the ride!

It sounds like the excitement’s revving up in Salem. As other news comes in, DOOL viewers will want to head back over to CDL for more Days of Our Lives spoilers and updates.