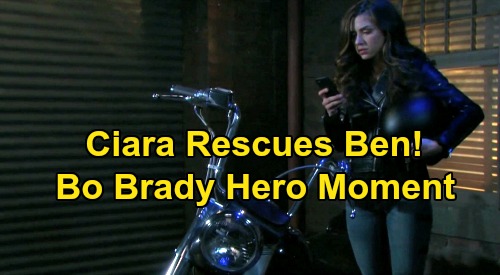 Days of Our Lives (DOOL) spoilers tease that Ciara Brady (Victoria Konefal) has a big surprise in store for Ben Weston (Robert Scott Wilson). DOOL fans know time’s running out for Ben behind bars. With his execution less than three weeks away, the situation is growing dire.

That’s why Ben will break out of prison with some help from Will Horton (Chandler Massey) and Clyde Weston (James Read).

Thanks to a guard that’s hot on their trail, Clyde will be apprehended. Despite a gunshot wound to the leg, Ben will be urged to press on. Clyde will hope his son can push through the pain and continue the rest of the way. His secret partner in crime will be waiting on Ben at a special meeting spot, which Ben will be filled in on beforehand.

As Ben limps over to this meeting spot, a bright light will shine in his eyes. Ben will briefly fear that the cops are there, but it’ll actually be Clyde’s secret ally: Ciara. She’ll ride to the rescue on her motorcycle – much like her dad, Bo Brady (Peter Reckell), would’ve done back in his younger years. Like father, like daughter!

Days of Our Lives spoilers say Ben will be stunned by Ciara’s involvement in all this. At first, Ben will be impressed by the lengths Ciara’s willing to go to for him. Ciara would do almost anything if it meant saving Ben from a grim fate.

However, reality will hit for Ben moments later. Days spoilers say Ben will object to Ciara blowing up her life. Ciara could get in serious trouble for helping a fugitive. He won’t want Ciara anywhere near his escape drama, but Ciara will put her foot down. She intends to help Ben whether he likes it or not.

It’s a good thing too since Ben will really need the assistance! Ciara will undoubtedly score some supplies and patch Ben’s leg up as best as she can. She’ll also stash Ben at the DiMera gatehouse, so she’ll definitely putting it all on the line for love.

Once Ben’s safely tucked away, Ciara can focus on trying to prove his innocence. She’ll focus on her new theory and hope it all pans out.