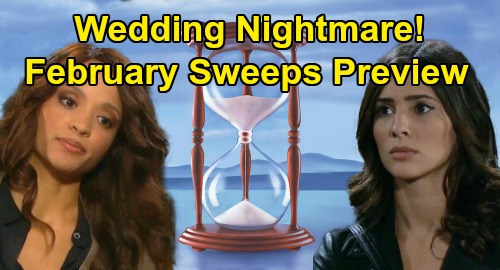 Days of Our Lives (DOOL) spoilers tease that some hot drama’s coming up in Salem. February sweeps will deliver some wild moments, so we’ve got an exciting preview of all the action. Here’s what you can expect over the next few weeks.

Nevertheless, Gabi will hope she can keep that plot under control and move forward with her nuptials. It won’t be easy as JJ Deveraux (Casey Moss) and Lani Price (Sal Stowers) rev up their plan to take Gabi down.

As for Doug Williams (Bill Hayes), he’s got a special day coming up to honor his 50 years on the show. An unexpected death will hit Doug hard and lead him to take a trip down memory lane.

Other Days spoilers say Rafe Hernandez (Galen Gering) and Roman Brady (Josh Taylor) will be in hot pursuit. They’ll do whatever they can to find Princess Gina Von Amberg aka “Hope Brady” (Kristian Alfonso) before more chaos erupts.

Marlena will be in grave danger, but she just might have a few tricks up her sleeve! As for Stefano, he’ll get injured and end up being tended to by Kayla Brady (Mary Beth Evans). It’ll rev up the chance for Kayla to realize “Steve” isn’t really Steve, so Stefano will battle concerns.

Chad DiMera (Billy Flynn) will finally get that Stefano meeting he’s been hoping for, so he’s in for a huge shock. If you think Chad will expose the truth immediately, think again.

Days of Our Lives spoilers say Chad will have to think long and hard about his next move. He could set himself up for trouble with Abigail DiMera (Kate Mansi) by keeping Stefano’s secret for a while.

Just when Mickey’s death seems inevitable, a last-minute match will surface. The source of it will be quite surprising – and based on some other clues out there, it looks like the match will be Tate Black. That should lead to some questions for Brady Black (Eric Martsolf), the true father in all this.

As for Kristen DiMera (Stacy Haiduk), DOOL spoilers say strange dreams will point her in the right direction. Kristen will feel like Rachel DiMera Black, her “dead” daughter, is calling out to her somehow. It won’t make much sense to Kristen yet, but it should down the road.

Ben Weston (Robert Scott Wilson) will also plot a prison escape with Clyde Weston (James Read), which Will Horton (Chandler Massey) will pitch in on. It’ll set up quite the romantic adventure for Ben and Ciara Brady (Victoria Konefal), who’ll do her best to be Ben’s hero.