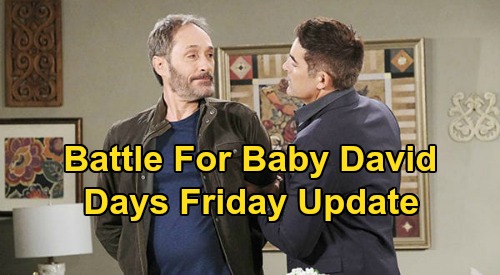 Ciara worked tirelessly to clear Ben’s name in Jordan Ridgeway’s (Chrishell Stause) murder case, but now he’s threatening to commit Evan’s! The last thing Ciara wants is for Ben to derail their dreams like this.

They can’t have a future together if Ben’s locked up again, so Ciara may beg Ben to let go for her sake. Ciara couldn’t stand watching Ben get arrested and hauled off again.

Of course, Ciara also knows this isn’t the kind of person Ben wants to be. Ben did some horrible things in the past, but he received medication and treatment to overcome that dark mindset – or so he thought.

All this Evan fury could force Ben to do some reflecting and perhaps focus on a better way to manage his anger. As for Evan, he’ll be relieved when Ben finally lets him out of this chokehold.

Other Days spoilers say Rafe Hernandez (Galen Gering) will point his gun at Orpheus (George DelHoyo), who’ll still be casually sitting on Rafe’s sofa. Rafe will assume Orpheus escaped and is there to wreak havoc, but neither of those things is true.

Orpheus scored his freedom legally, so he’ll want Rafe to put the gun down and focus on what’s important here: custody of David.

Grandpa Orpheus naturally wants Evan to raise his biological child, but Rafe considers David his own son now. Rafe was all set to adopt David before Evan raised red flags through his background check. Days spoilers say Rafe and Orpheus will clash over what’s best for the boy in Friday’s episode.

Rafe might even threaten to have Orpheus thrown in jail again. After all, Orpheus is now guilty of breaking and entering. Rafe would much rather have Orpheus behind bars where he can’t do more damage, but Orpheus will keep his freedom for now.

That freedom will prove quite unsettling to Marlena Evans (Deidre Hall), who’ll get the bad news from John Black (Drake Hogestyn). Days of Our Lives spoilers say John will give Marlena updates on their old foe’s release, but you can bet he’ll vow to keep her safe. “Doc” always comes first for John!

Other DOOL spoilers say Justin Kiriakis (Wally Kurth) will promise to fight for Kayla Brady (Mary Beth Evans). Justin will give Steve Johnson (Stephen Nichols) the heads-up, so they’ll both know what they’re up against.

It’s classic love versus new love, but both Justin and Steve will think they have a shot. Steve will be especially confident since he trusts in that unbreakable “Stayla” bond.

Next week, Steve will decide to bow out of this battle and just let Kayla be happy with Justin, but he’ll remain at war with his rival for now. As for Kayla, she’ll deal with messy emotions as she vents to Jennifer Deveraux (Melissa Reeves). What’s Kayla supposed to do when she’s in love with two men?

Jennifer will get that Kayla’s feeling overwhelmed, but Kayla’s heart will lead her in the right direction if she just listens. After Jennifer offers up some guidance, she’ll cross paths with Justin at Doug’s Place.

Jenn may let Justin know he’s a good man, no matter the outcome. When it comes down to it, Kayla’s happiness is the priority. That’s something Justin and Jennifer can agree on!