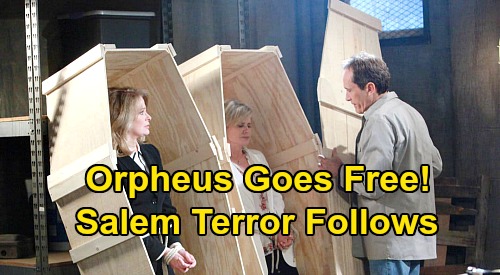 Days of Our Lives (DOOL) spoilers tease that John Black (Drake Hogestyn) will have some disturbing news for Marlena Evans (Deidre Hall). DOOL fans know John and Marlena are currently on cloud nine thanks to Marlena’s successful surgery. They’re ready to get their future together back on track, but another enemy could be waiting to strike.

Marlena and John faced a terrible ordeal thanks to Stefano DiMera aka Steve Johnson (Stephen Nichols), but they’re putting all that behind them. Steve will soon regain his memories and get back to his old self, so that’s great to hear. What isn’t so great to hear is that Orpheus (George DelHoyo) is back in the picture!

Days viewers will recall that Orpheus has a ruthless history of going after Marlena. Orpheus has faked Marlena’s death, kidnapped her repeatedly and even once tried to burn her alive in a coffin. Of course, Orpheus has also been known to wiggle out of tight spots, which is why Marlena should be unnerved by John’s updates.

John will give Marlena the latest scoop during the week of April 13-17. After Orpheus scores his freedom, Marlena will realize more terror could be unleashed.

When it comes to Days villains, Orpheus is one of the coldest and most calculated. He’s not one of those cartoony villains who twirls a mustache and never really accomplishes anything. Orpheus is manipulative and deadly!

Will Orpheus target Marlena once again? Days of Our Lives spoilers say that’ll certainly be a concern for John and Marlena to mull over. However, Marlena will end up ripping into Orpheus in an upcoming faceoff.

It sounds like Marlena will find her strength and shove her fears aside, but she might anger Orpheus in the process. There could be more trouble if this battle’s truly reignited.

Jennifer Deveraux (Melissa Reeves) will also be uneasy when she realizes Orpheus is a free man. Orpheus is definitely someone who belongs behind bars, so let’s hope he slips up and lands back there soon!