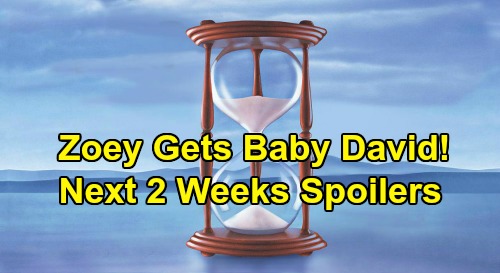 Days of Our Lives (DOOL) spoilers for the next two weeks tease that chaos will erupt in Salem. During the week of April 13-17, Sarah Horton (Linsey Godfrey) will dump Xander Kiriakis (Paul Telfer) during their wedding ceremony. Xander will beg Sarah to see things from his perspective, but she’ll cut him out of her life entirely due to the baby switch.

Elsewhere, Brady Black (Eric Marsolf) will learn the stunning truth about Rachel DiMera Black. He’ll hear it from Eric Brady (Greg Vaughan) and Nicole Walker (Arianne Zucker) before tracking down Kristen DiMera (Stacy Haiduk). As DOOL fans can imagine, Kristen will be overwhelmed by this news in every way possible.

Before Kristen and Brady can have a reunion with Rachel, Sarah will take off on the Titan jet with the baby. It’ll leave everyone panicking over where Sarah went and how to find her.

Meanwhile, Steve Johnson (Stephen Nichols) will get emotional as he recalls his great love for Kayla Brady (Mary Beth Evans). Steve will naturally expect to reunite with “Sweetness,” but she’ll admit she’s moved on.

Justin Kiriakis (Wally Kurth) will decide he’s not giving Kayla up without a fight. Of course, Steve will also fight for the woman he loves. Kayla will have a difficult decision to make, and it’s one she won’t take lightly.

DOOL viewers know Evan and Orpheus (George DelHoyo) have a joint legal defense, so Zoey (Kelly Thiebaud) will arrive on the scene as their attorney. It turns out Zoey is also Evan’s sister and Orpheus’ daughter. That should be one of the bombs Zoey drops, but scoring Orpheus and Evan their freedoms should be another.

During the week of April 20-24, Zoey will deliver yet another shocker. Days of Our Lives spoilers say Zoey will announce she’s suing for custody of David Ridgeway (Caleb and Kyler Ends). Rafe will be stunned, but Aunt Zoey will insist she’s the best person to care for her nephew.

Over with Sarah, she’ll make Paris her hideout as she tries to keep Mackenzie “Mickey” Horton. Sarah won’t want to give Rachel back to her rightful parents, so she’ll think this is the only solution.

This whole baby snatching will leave Brady, Kristen, Nicole and Eric waiting anxiously for updates. Xander may work to figure out where the Titan jet landed, but will he tell the others or protect Sarah?

Other Days spoilers say Kristen will blast Victor Kiriakis (John Aniston) for his role in the baby swap. Kristen’s attack will leave Victor in desperate need of medical care. Victor will have to be rushed to the hospital by the time this encounter’s over.

Next, Steve will make a shocking choice regarding Kayla. Perhaps Steve will decide he should step aside and just make this easier on his love. However, Kayla will make a major choice of her own the very next day.

Kayla reveal the fate of their relationship to Justin, so he may learn they’re breaking up. Whether Kayla splits from Justin now or later, “Stayla” is the couple to root for here.

Finally, Days of Our Lives spoilers say a floored Gabi Hernandez (Camila Banus) will see someone familiar – and that has to be Stefan DiMera (Brandon Barash)!

Stefan will first be seen when Gabi spots him in a store window, but he’ll disappear just as quickly. Will Stefan really be in town or will he be sending Gabi a message somehow – just to let her know he’s out there somewhere?

Either way, Days spoilers say Gabi will have a strange feeling that Stefan’s alive. You can bet Gabi will be on a mission for answers, so stay tuned. CDL’s the place to be for exciting Days of Our Lives spoilers, news and updates.