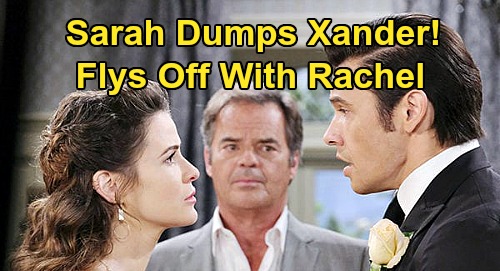 Once Sarah wraps her head around this horrific news, she’ll know exactly what she has to do. Days of Our Lives spoilers say Sarah will plot Xander’s comeuppance. At the Kiriakis mansion, Sarah will let Xander believe their nuptials will proceed as planned. Xander will be on cloud nine as he says an enthusiastic “I do.”

When it’s Sarah’s turn, she’ll let Xander know that she doesn’t! Days spoilers say Sarah will unload all her pain and anger in that moment.

Sarah will be appalled with Xander for swapping her dead daughter with Brady Black (Eric Martsolf) and Kristen DiMera’s (Stacy Haiduk) perfectly fine one. Poor Sarah has bonded with Rachel DiMera Black as if she were her own child.

Of course, Days of Our Lives spoilers say Xander will immediately do damage control. He’ll cling to hope that he can somehow salvage his relationship with Sarah, but she’ll insist she wants nothing to do with him. Sarah will make it clear that she’s done with Xander and never plans to see him again.

Next, Sarah will take Mackenzie “Mickey” Horton aka Rachel upstairs for a tragic farewell – or so she’ll claim. In reality, Sarah will be setting a desperate plan in motion.

Days of Our Lives spoilers say Sarah will have time to carry it out while Eric Brady (Greg Vaughan) blasts Xander. After Eric’s finished, he’ll head up to find Sarah and realize she’s not there. Both Sarah and Mickey will be gone!

Eric will give Brady and Kristen a call to see if Sarah might be with them. In light of the baby bomb, Eric will think maybe Sarah brought Mickey over for a reunion with her true parents. However, Kristen and Brady will admit they haven’t seen Sarah. That’s when Eric will truly grow concerned.

It won’t be long until Eric and Xander get updates on the Titan jet’s takeoff. Xander booked it for his honeymoon with Sarah, but she’ll use it to make her getaway with Mickey instead.

Days spoilers say Xander will feel terrible when he learns Sarah’s made such a drastic decision to steal Rachel. Between the guilt and the blow of Sarah dumping him, Xander will be in a dark place.

It sounds like some fantastic episodes are coming up. Sarah’s choice to kidnap Rachel is sure to bring plenty of drama! Don’t forget to stop by CDL frequently for other sizzling Days of Our Lives spoilers, updates and news.